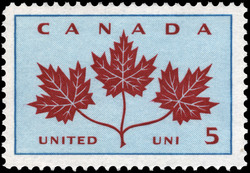 With this stamp, the Canada Post Office introduces its first major series of postal issues leading up to the 100th anniversary of Confederation. It is intended to issue, before the year of Canada's birthday, a stamp showing the floral emblems and armorial bearings of each province and territory - a possible total of thirteen different stamps. To introduce the series is the Maple Leaf stamp, symbolizing the whole of Canada, and this will be followed by the stamps of the ten provinces and the nothern territories. The stamp which is the third in the programme for 1964, shows three red maple leaves, joined on a single stem, on a blue background. This design, taken from the Arms of Canada, appears in the lower part of Canada's shield and is an integral part of the heraldic symbol for Canada itself. The design, as used in the postage stamp, is intended to express the idea of Canadian unity, with various parts and groups united in a common purpose. In 1920, the use of three maple leaves on a white field was approved by Order in Council as the official insignia of Canada. A blue background was added to the stamp as it is very difficult to recognize a white stamp against the background of a white envelope and, with the postal service turning more and more to the mechanical recognition and cancellation of stamps, it was necessary to design a stamp with a more sharply-contrasting background. The three maples leaves have appeared on Canadian postage stamps before. The Plains of Abraham stamp, issued in 1959, also featured three leaves and at that time was intended to show the British, the French and many other ethnic groups had fought and worked together to produce a united Canada. The words "United" and "Uni" on the present stamp emphasize this message.