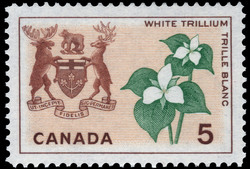 The hidden date for this stamp can be found at the base of the shield in Ontario's coat of arms. The white trillium of Ontario and the white garden lily of Quebec are the focal points in two new postage stamps to be issued on June 30th by the Canada Post Office. The new issues are the first o a series that will, during the next three years, illustrate the provincial flowers of all ten Canadian provinces. Sharing the stamp design with the official floral emblems are the armorial bearings of the two provinces. Those of Ontario show a cross of St. George in the upper section and three maple leaves on a single stem in the lower part. The shield is flanked by animals indigenous to the province. At the bottom is a scroll bearing the motto "Ut incepit fidelis sic permanet" - Let him remain faithful to his origins. The stamps bearing these designs are being rendered in three-colour printing by a combination of offset lithography and steel-line engraved intaglio printing. It is anticipated that all the stamps in the floral emblem series will be produced by this method. The Ontario and Quebec stamps were chosen as the first in the floral series as these two provinces, along with New Brunswick and Nova Scotia, were the first to enter Confederation in 1867. Stamps depicting the official flowers and armorial bearings of these two Maritime provinces are planned for 1965, as well as those of several other provinces. In addition to being the two largest and most populous provinces of Canada, Ontario and Quebec have played major roles in the development of the Canadian nation. Founded in the 18th Century by explorers from France, Quebec maintains its French traditions of language and culture. Basically English in origin, Ontario was settled and developed much later that its sister province. Together, the two were known as the "Province of Canada" and separately as Upper Canada and Lower Canada. It was political leaders from these provinces who, at Charlottetown in 1864, persuaded representatives of the Maritime Provinces to expand their idea of a union of all the British colonies in North America to a greater Confederation, a union which was achieved by the British North America Act of 1867 and which led to the Canadian nation of today.