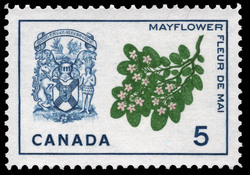 The hidden date for this stamp can be found at the base of the coat-of-arms.

Along with the present provinces of Ontario and Quebec, Nova Scotia and New Brunswick were the first of the British North American colonies to unite and bring about the Confederation, known as Canada. The two new stamps being issued by the Post Office to commemorate this historic fact, continue the floral emblem series of postage stamps, scheduled for issue between now and Canada's Centennial year of 1967. In September 1864, at Charlottetown, delegates from the Maritime Provinces met with a view to forming a Maritime union. While in session, they were joined by delegates from what is now Ontario and Quebec and union of all the British North American provinces was considered. The Quebec Conference followed later in the same year when the Seventy-Two Resolutions, the basis for Canada's Constitution, were drafted for presentation to the British Government. The stamp honouring Nova Scotia shows the Arms and the Floral Emblem of that Province, the trailing arbutus (Epigaea repens L.), more commonly known as the Mayflower. This flower was officially adopted by the Province in 1901, although as far back as 1825, it was used as a decorative motif on the front page of the "Nova Scotian" and on the buttons of the Nova Scotia Militia. It is interesting to note that the Mayflower also appeared on a series of postage stamps issued by Nova Scotia during the period 1851 to 1853. The two stamps are being printed by a combination of the intaglio process with complementary colour work done by the offset process using hand engraved masters for the original plates. This combination of printing methods is relatively new to Canadian postage stamps. It was used for the Peace stamp and the floral emblem stamps of Ontario and Quebec. The stamps are being engraved and printed by the Canadian Bank Note Company Limited of Ottawa based on drawings supplied by the Dominion Bureau of Statistics.