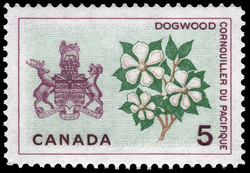 The hidden date for this stamp can be found underneath the lion in the coat-of-arms. These two new stamps honour the provincial flowers of the fifth and sixth provinces to enter Confederation. Manitoba in 1870 and British Columbia in 1871. These stamps continue the floral emblem series scheduled for issue between not and the Centennial Year of 1967. The coastal areas of British Columbia were probably first sighted by white men under Sir Francis Drake in 1579, but it was not until the voyages of Captain James Cook in March 1778, and Captain George Vancouver from 1792 to 1794 and the overland explorations of Sir Alexander Mackenzie from 1789 to 1799 that the British claim to the area was firmly founded. Even then, American influence was great, and the entry of British Columbia into Confederation in 1871 was at least partially the result of efforts to ensure continued British sovereignty. The establishment of a direct rail link with the East ensured the economic security of the new province. The dogwood (Cornus Nuttalli) became the official flower of British Columbia in 1956. As with most of the stamps in the floral emblem series, the Manitoba and British Columbia stamps are being printed in three colours, in a combination of offset and intaglio printing.