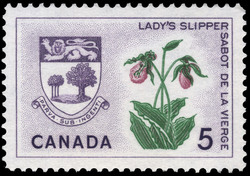 The hidden date for this stamp can be found in grass on the coat-of-arms.

The stamp illustrated in this folder is the lady's slipper or moccasin flower (Cypripedium acaule), which was named official flower of the Province of Prince Edward Island by the provincial Legislature in March of 1965. The stamp is the seventh in the Canada Post Office series honouring the official flowers and coats of arms of the ten provinces and the two northern territories. Prince Edward Island was first sighted by the French navigator Jacques Cartier and was first settled by pioneers from France in 1719. Originally called Ile St. Jean, the island province was re-named Prince Edward Island in 1799 in honour of Edward, Duke of Kent, the father of Queen Victoria. In 1864, representatives from the three British maritime colonies of New Brunswick, Nova Scotia and Prince Edward Island met at the Island's capital of Charlottetown to discuss a regional union. There they met delegates from the Province of Canada (now Ontario and Quebec) and plans were put into motion for a second conference at Quebec which resulted eventually in the passing by the United Kingdom Parliament of the British North America Act of 1867, Canada's constitutional document. Prince Edward Island itself did not join the Canadian union until 1873. The stamp portrays, on the right, the lady's slipper or moccasin flower. The floral component of the stamp is printed by offset lithography, while the background and the provincial coat of arms, on the left, are printed by intaglio. Design and engraving of the stamp is by the Canadian Bank Note Company Limited with assistance from the Public Airlines of Prince Edward Island and the Federal Department of Agriculture.