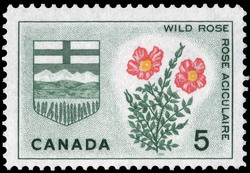 The hidden date for this stamp can be found near the base of the wild rose. The date is printed with many small dots.

The floral emblem stamps of the twin prairie provinces, Alberta and Saskatchewan, which entered Confederation in 1905, are appropriately being issued together. The history of these prosperous provinces is linked in many ways. In 1691 the verse-writing explorer, Henry Kelsey, became the first white man to reach Saskatchewan and the eastern part of Alberta. In 1754-55 Alexander Henday explored the North, and in 1792-93 Peter Fidler Explored the South Saskatchewan River. Both branches of the Saskatchewan from Canada's fourth longest river. In 1821, the feuding Hudson's Bay Company and Northwest Company joined to continue a peaceful but systematic and more profitable fur trade in these western lands. Sovereignty over the Northwest Territories, as the areas of Alberta, Saskatchewan and Manitoba were then known, was transferred from the Hudson's Bay Company to the Government of the new Dominion of Canada in 1870. Twelve years later, the Districts of Saskatchewan and Alberta were created. Then, in 1885, the Northwest rebellion broke out and the march toward provincial status began. The completion of the Canadian Pacific Railroad in 1885 heralded the beginning of an inrush of settlers to the prairies which reached its peak in the years before World War I. With the homesteaders came the more insistent cry for provincial status. The federal government then created in 1905, the two provinces which celebrated their Diamond Jubilee in 1965, Saskatchewan and Alberta. The founders of St. Augustus (Edmonton) little imagined in 1794 that their fort would become in 1906, the capital of the province of Alberta. This province has progressed, too. from those pioneer days of 1874 and 1875 when the Royal North West Mounted Police established Fort Macleod and Fort Calgary. Today Alberta is known for such products as grains, cattle, oil, natural gas and coal. The wild rose, Rosa acicularis became Alberta's provincial floral emblem in 1930 after it was chosen through a vote by provincial school children.