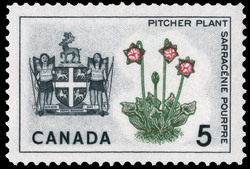 The hidden date for this stamp can be found in the base of the coat-of-arms.

The floral emblem on this stamp honours Newfoundland, Canada's 10th province, which entered Confederation in 1949. The pitcher plant or Indian Dipper, Sarracenia purpures, was officially adopted as Newfoundland's floral emblem in 1954. Newfoundland's history has been as romantic and varied as its place names; Heart's Content, Spaniard's Bay, Cupids, Fleur-de-Lys, and Topsail. By 1011 A.D., it is estimated, hardy Norsemen had visited and vanished from the Labrador coast. The English West Country fishermen, who were destined to exert a strong influence on Newfoundland's development, arrived at the cod-rich Grand Bands about 1450. In 1497, John Cabot claimed sovereignty over Newfoundland for England. The rivalry between France and England for jurisdiction over the shores of Newfoundland and Labrador was foreshadowed by the establishment in 1610 of the first permanent English settlement at St. John's and by the founding of the first permanent French colony on Placentia Bay in 1662. British sovereignty over the Newfoundland-Labrador area was not assured until about 1815. Throughout its early history, settlement had been discouraged in Newfoundland. It was not until 1824 that Britain recognized Newfoundland as a colony, not merely a fishing outpost. Representative government was set up at this time. Expansion seemed to be the watchword until 1892 when a fire virtually destroyed the city of St. John's. The Newfoundlanders began to rebuild. The golden promises of future development were, however, soon dashed. Newfoundland's contribution to World War I was immense. The Royal Newfoundland Regiment suffered casualties to 80% of its membership in battle. Partly because of the enormous war effort and unfavourable economic conditions, Newfoundland began, in 1934, 15 years of commission government supervised by Britain. In World War II, Newfoundland became an important allied defence centre. After the war, in 1948, a referendum on the question of federal union with Canada was approved by the population. Newfoundland entered Confederation on March 31st, 1949. Its best known resource is fish, such as lobster, herring, halibut and cod, which are caught off the most extensive fishing grounds in the World, the Grand Banks. The province has a great hydro-electric potential, large deposits of minerals such as iron, ore, zinc, lead and copper and extensive forest lands.