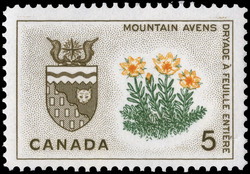 The hidden date for this stamp can be found near the base of the mountain avens. The date is printed with many small dots. The Yukon, land of the midnight sun, and the Northwest Territories, a modern day frontier, are honoured by stamps commemorating their floral emblems. The fireweed (Epilobium angustifolim) is the emblem of the Yukon, while the mountain avens is the emblem of the Northwest Territories. During the 300 years after 1000 A.D., Norsemen were landing on the shores of the eastern Arctic. The 1577 English claim to Baffin Island was made by Sir Martin Frobisher. The ill-fated Henry Hudson sailed into Hudson Bay in 1610 and in 1689 Henry Kelsey made the first overland expedition to the territories. Great Slave Lake, the uper Mackenzie, and the Liard Rivers were discovered by the notorious Peter Pond in 1779-80. Alexander Mackenzie, for whom Canada's longest river is named, traversed the lower reaches of the Mackenzie to the Arctic Ocean in 1789. Sir John Franklin explored 2,000 miles of Arctic coastline before he was lost at sea in 1857. It was not until 1903-6 that the North West Passage was first navigated by Roald Amundsen. The R.C.M.P. vessel the "St. Roch" sailed this passage both ways between 1940-44. The north is still being explored. The prospect of large deposits of lead, zinc, tungsten and other metals has encouraged surveys of the mineral potential of the territories. The Yukon territory comprises 5.4% of Canada's area. Withing its borders stands Canada's highest peak, the second highest mountain in North America, Mt. Logan. It was furs, not the promise of a North West Passage, which attracted men to the Yukon. The Yukon fur trade began about 1842 when the Hudson's Bay Company established Fort Frances, east of present-day Whitehorse. The first gold seekers crossed the treacherous Chilkoot Pass in 1878 and began the search which was to culminate at the turn of the century in the great Klondike gold rush. The Yukon's truly golden year was 1896 when G.W. Carmack made a gold strike on Bonanza Creek and the rush began. In 1913 another profitable mineral development was begun - the silver-lead mine at Keno Hill. The Yukon today is a major producer of silver, lead, gold and furs. The stereotyped image of the north held by residents in Canada's southern cities is being changed. Canadians are surprised to learn that centres such as Frobisher Bay (on Baffin Island) and Pine Point (on the south shore of Great Slave Lake) have conveniences such as schools, hospitals, banks, hotels, taxis and modern homes. Whitehorse, Yellowknife, Churchill and Dawson, all well established towns, provide homes and supplies for miners, trappers and oil drillers in the north.