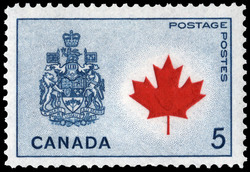 The hidden date for this stamp can be found underneath "USQUE" in the coat-of-arms.

This stamp is the final release in the series begun in 1964 with the issue of the Maple Leaf "Unity" stamp. Stamps bearing the provincial armorial bearings and floral emblems of all ten provinces plus the Yukon and Northwest Territories were issued in the order in which they entered Confederation. The Canada Coat of Arms stamp is a logical culmination to a series designed to lead up to the centenary of Canada's Confederation. On November 21, 1921, King George V issued a proclamation which established Canada's Coat of Arms. This ended over half a century of indecision concerning the final appearance of the Canadian Coat of Arms. In 1868, a design for the Great Seal of Canada, incorporating the Arms of the four original provinces in the Dominion was devised and introduced extensively as an emblem. When the Arms of the five additional provinces were added, the resulting product was unattractive and cluttered. Consequently, a unified design was prepared and approved in 1921. The shield bears the Royal Arms of England, Scotland, Ireland and those of France. Three maple leaves conjoined appear below. The British Lion, holding the Union Jack stands to the left, and the Unicorn, holding the French fleur de lis to the right. On the bottom appears the Canadian motto: "A Mari usque ad Mare", or "From sea to sea". The maple leaf, which appears to the right of the Canadian Coat of Arms, was chosen for the central element of the national flag on February 15, 1965. However, it has been a Canadian symbol since before Confederation. The maple leaf has appeared in heraldic history since 1868, when Queen Victoria gave "armorial ensigns" to Quebec and Ontario, based on a sprig of three maple leaves. The maple leaf employed today has eleven points, and was designed for easy recognition as the emblem of Canada. This final stamp in the provincial emblem series was prepared and produced by the Canadian Bank Note Company, and was printed in red and blue by the intaglio steel engraving process.