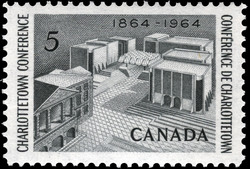 This stamp commemorates the historic meeting at Charlottetown, P.E.I., which lasted from September 1 to September 9, 1864, and which was the first of a number of steps which led to the creation of the Canadian nation in 1867. The meeting at Charlottetown was to have been attended by delegates from New Brunswick, Nova Scotia and Prince Edward Island. The object was to discuss a political union of the three Maritime provinces, a project for which there was not a great deal of enthusiasm at that time. Interest in the Conference increased, however, when it was learned that the Provinces of Canada - now Ontario and Quebec - had asked permission to send a representation. As a result, the Maritimers delayed until eight leading political figures from the central provinces arrived in Charlottetown to advocate a wider union of all the British colonies in North America. The delegates were most persuasive and in the outcome, they succeeded in convincing the Maritimers to attend a later conference to be held in Quebec. At this conference, details of the proposed union were to be discussed. From the Charlottetown Conference, and from the later Conference at Quebec, emerged the points of agreement on which the British North America Act was based. This became the basis of Canada's constitutional government in 1867. The stamp illustrates the new Fathers of Confederation Memorial which has been constructed in Charlottetown to mark the centenary of the historic meeting. At the left is the Provincial Building, site of the original conference. The new complex contains many public buildings including a library and an auditorium, all of modern design in contrast with the traditional structure of the Provincial Building immediately adjacent to it. The stamp was detailed and engraved by the Canadian Bank Note Company Limited, based on suggestions put forward by Philip Weiss of Ottawa, designer of many Canadian postage stamps.