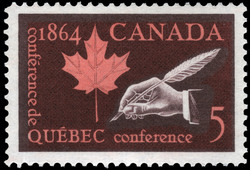 The hidden date for this stamp can be found on the cuff of the hand's sleeve. This postage stamp is issued to commemorate the 100th anniversary of the historic conference at Quebec at which many basic agreements were reached which subsequently led to Confederation in 1867. The conference followed by a month an earlier gathering at Charlottetown P.E.I., where some agreement had been reached on the principal of a federal union of British colonies in North America. The Quebec meeting lasted from October 10 to October 27 and resulted in the formulation of Seventy-Two Resolutions which were drawn up as an outline for the proposed union. These resolutions eventually formed the basis of the British North America Act of 1867, Canada's written Constitution. The Quebec Conference was attended by 33 delegates from New Brunswick, Nova Scotia, Prince Edward Island, Newfoundland and what is now Ontario and Quebec. The conference successfully faced many complex economic and political problems. The resolutions of the conference were accepted warmly by the Colonial Office in London. They were passed without difficulty in the central provinces but some persuasion was required to achieve their acceptance in New Brunswick and Nova Scotia. Prince Edward Island and Newfoundland decided against entering the union at that time. The stamp commemorating this historic meeting was designed by Philip Weiss of Ottawa and is printed by the steel intaglio process in two colours by the Canadian Bank Note Company Ltd.