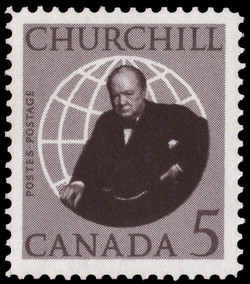 Sir Winston Churchill, Britain's great statesman and warrior who has had many associations with Canada, particularly as a member of the Canadian Privy Council, becomes one of the few persons who was neither a member of the Royal Family nor a Canadian to be commemorated by the issue of a Canadian postage stamp. In the course of his ninety years, Sir Winston guide the British nation through world conflict and achieved an untarnished reputation for statesmanship and eloquence. He was acclaimed the world over in the fields of journalism, writing and art. To the thousands who listened by their radios during the war years, he will be remembered by his words of resolution and strength that echoed his hope, his determination and his unflinching courage. The date of issue of this special stamp coincides with the 24th anniversary of the meeting of Sir Winston Churchill and President Franklin D. Roosevelt which resulted in the enunciation of the Atlantic Charter. The meeting took place in Placentia Bay, off the south-east coast of Newfoundland, on August 12, 1941. When Sir Winston passed away on January 24th, 1965, it marked the end of an era in which one person stood out and bore the weight of world history. The roaring voice, the gentle and sometimes cutting humour would no longer be heard, but in the minds of men around the world, Churchill and his accomplishments will continue to be remembered. The stamp, based on the famous "Roaring Lion" portrait by Yousuf Karsh, was designed by Phillip Weiss and is the first Canadian stamp to be printed by duo-tone lithography, a printing process particularly suited to this type of reproduction.

Designed by Ephrum Philip Weiss. Based on a photograph by Yousuf Karsh.