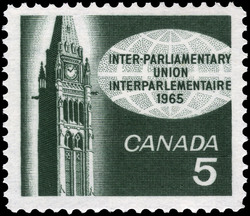 The stamp illustrated in this folder marks the first meeting in Canada of one of the world's oldest international parliamentary groups. The Inter-Parliamentary Union. This 75 nation conclave will be held in Ottawa from September 8 to 17. The Union is an international association of parliamentarians. It has as its aim the promotion of personal contacts between members of all Parliaments, with a view to uniting them in common action to secure and maintain the full participation of their States in the development of democratic institutions. The Union also aims to advance the work of international peace and co-operation. The Inter-Parliamentary Union dates back to 1889 when a group of British and French parliamentarians decided to hold periodically an "Inter-Parliamentary Conference for International Arbitration". The movement grew quickly and by 1894 a permanent organization had been set up with its own Statutes and Secretariat. Since that time, except for interruptions during two World Wars, the Union has functioned continuously, changing its methods and expanding its operations to meet new and changing circumstances. The Union has consultative status with the Economic and Social Council of the United Nations and also maintains regular contact with other United Nations specialized agencies. The stamp represents the meeting place at Ottawa, signified by the Peace Tower, dominant feature of Canada's Parliament Buildings, on the left, and the world-wide implications of the Union, as shown by the globe at the upper right. The stamp was designed by Philips-Gutkin of Winnipeg, Manitoba. It is the first occasion on which this organization has designed a Canadian postal issue. Engraving and printing by the steel-line intaglio process is by the Canadian Bank Note Company Limited.