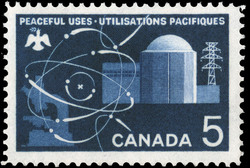 With the issue of this stamp, the Post Office Department pays tribute to the effort being made by world scientists towards the development of peaceful uses of atomic energy. The role of Canada in this world endeavour is considerable. Canadian scientists for example, are working in the fields of materials science and in engineering research. Work is being done in biology and health physics, in the development of cancer therapy units, and on the biological effects of radiation. Physicists at remote northern points are involved in the International Quiet Sun Years Programme, with the aim of studying variations in intensity of cosmic rays during this period of minimum activity of the sun. From Point Pelee, Ontario, to Alert, N.W.T., in isolated communities and in metropolitan centres, Canadian scientists are attempting to create new ways to utilize the powerful forces of atomic energy. One of the most heralded uses of atomic energy has been in the field of electricity generation. It has been conservatively estimated that demand for electricity will increase twenty times within the next five years, and as a result, nuclear power stations are acknowledged to be among the prime source of future electricity. Naturally enough, researchers over the world have developed different types of nuclear reactors to produce electric power. For her part, Canada has followed a route of power reactor development that is uniquely different from the major programs in most other nuclear advanced countries; a system based on the use of natural uranium fuel, and heavy water as a moderator and coolant. This year, the large-scale production of nuclear-electric power in Canada becomes a reality, as the Douglas Point Nuclear Power Station goes into operation. The first full-scale nuclear power plant in the country, Douglas Point has a reactor known by the code name CANDU, or Canadian Deuterium Uranium. The Douglas Point station, located in Ontario on the shores of Lake Huron, can produce 200,000 kilowatts of electricity from one unit - enough to supply a city the size of Ottawa. And its use is not limited to basic electricity production. As a full-scale prototype, it is a fore-runner of even larger stations such as the Pickering Generating Station; a million kilowatt nuclear power station scheduled for completion in 1970-72. The CANDU principle has been employed in a reactor being built by India, and plans are being made for a heavy water reactor of a similar type at Karachi, Pakistan. Today, the station at Douglas Point stands as a tangible symbol of the potentiality of atomic energy as a source of much-needed power, and as an example of the contribution that atomic energy, applied to peaceful ends, can make to the world. This stamp features symbols of some of the major contributions Canada is making to atomic energy research. A stylized representation of the Douglas Point Nuclear Station is shown, together with a microscope symbolizing research, and the chemical symbol for a heavy water atom. In the upperleft corner is the dove of peace emphasizing the purpose to which this development is devoted.