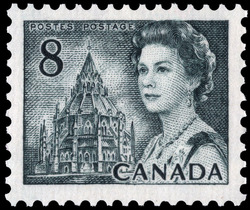 The year 1972 was proclaimed International Book year by the United Nations Ecomomic, Social and Cultural Organization (UNESCO) at the 16th session of its General Conference. In issuing this new 8c. definitive stamp, the design of which includes the Library of Parliament, Canada is paying tribute to International Book Year and recognizing the importance of the role books play in society. The UNESCO resolution that established International Book Year pointed out the importance of the written word for the progress of human civilization. Books and periodicals make an essential contribution to social life and its development and in addition have a fundamental role in the realization of UNESCO's objectives - peace, development, the promotion of human rights and the campaign against racialism and colonialism. The resolution also invited member states to initiate programmes to encourage the writing, production and distribution of books, to carry out activities which will stimulate the habit of reading, and to celebrate International Book Year at a national level. The Library of Parliament is an appropriate national symbol of Canada's participation. The Library of Parliament was established in 1871 by An Act in relation to the Library of Parliament. It was formed initially by the amalgamation of the legislative libraries of Upper and Lower Canada after the two provinces united to become the Province of Canada in 1841. The Library is a separate building to the rear of the Centre Block of the Parliament Buildings. Construction of the original building was completed in 1876. When the Centre Block was destroyed by fire on February 3, 1916, heavy iron doors in the corridor connecting the two buildings saved the Library. In 1952, however, the Library was the victim of the same enemy, and much of it had to be rebuilt. The original interior woodwork was carefully preserved, but fireproof and fire-resistant materials were used as much as possible in the reconstruction. The Library was reopened in 1956. The Speaker of the Senate and the Speaker of the House of Commons are responsible for the direction and control of the Library. They are assisted by a joint committee appointed by the two Houses at each session. The day-to-day operations of the Library are in the hands of the Parliamentary Librarian. The Library supplies the Senate and the House of Commons with both reference and research material. It currently houses some 300,000 volumes and receives all 103 Canadian daily newspapers, almost all the Canadian weeklies, 1,800 periodicals and all federal and provincial publications, as well as the publications of international organizations such as the United Nations. The Reference Branch answers inquiries, selects and provides source material for use in speeches and papers, prepares bibliographies, indexes and abstracts, and lends library material. Because of the quality and size of the collection, this branch also provides substantial assistance to Royal Commissions, government departments, the academic community and other non-parliamentary groups and individuals. The Research Branch was established in 1965. It complements the Reference Branch, but serves only Senators and Members of Parliament. Its lawyers, economists and other professional personnel prepare research papers and notes at the request of Senators, Members of Parliament, Parliamentary Committees and Parliamentary Associations. The Library of Parliament is the public's main information centre for parliamentary information. If International book Year is successful in stimulating the interest of Canadians in reading, especially reading Canadiana, it could well give an important boost to our publishing industry.