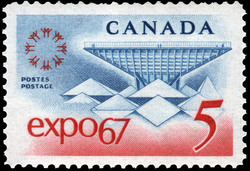 The World's third and North America's initial Universal and International Exhibition of the First Category is saluted by this Canada Post Office Commemorative Stamp. Canada's stamp has as the basis of this design a view of the Canadian Government Pavilion which was built at a cost of $21,000,000. Appropriately for a host country celebrating its 100th year, Canada places its exhibits in the largest pavilion at Expo; covering eleven and one-quarter acres, it is dominated by an inverted pyramid named "Katimavik", an Eskimo word meaning "a meeting place". At the upper left corner of the new stamp is a reproduction of the 1967 World Exhibition official symbol inspired by one of the oldest drawings of man. Eight groups of two of these drawings for a circle to emphasize the world-wide brotherhood and friendship of mankind; in this way it graphically portrays Expo's theme of "Man and his World". Designed by Julien Hébert, a Montreal industrial artist, the symbol was officially adopted on the 12th August 1963. Canada's aspirations to stage a major exhibition in Montreal were rewarded late in 1962 when the International Exhibitions Bureau granted permission for the event to coincide with the nation's Centennial year. Necessary legislation to permit governmental participation was passed by the House of Commons and on the 6th of September, 1963, an announcement from the Prime Minister's office appointed the Honourable Pierre Dupuy as Commissioner General of the Canadian Corporation of the 1967 World Exhibition. Expo's one thousand acre site is a dramatically enlarged St. Helen's Island, man-made Île de Notre-Dame and adjoining MacKay Pier, now renamed Cité du Havre. Situated mid-stream in the historic St. Lawrence River, it is minutes from downtown Montreal. Thirty million people from throughout the world are expected to enter Expo during the six months its gates are open, 29th April to 27th October, 1967. They will gain entrance with tickets renamed Passports to engage in a world tour through pavilions erected by more than 70 nations and hundreds of exhibitors at an estimated cost of more than $300,000,000. Based on a design developed by the Canadian Bank Note Company Limited, Ottawa, the new stamp is produced in colours of red and blue on white. It will be available in Montreal from 28th April to mid-October, 1967, and from all Post Offices in Canada for the first ten days after issuance. A significant change on this occasion is that First Day Covers will be processed by the Canada Post Office from the Expo 67 site with an appropriate die to indicate the source. First Day Covers will not be provided with the customary Ottawa postmark.