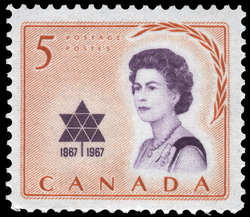 The visit of Her Majesty Queen Elizabeth II to participate in Canada's Centennial celebration is honoured by this Canada Post Office commemorative stamp. Her Majesty, accompanied by her husband, His Royal Highness The Duke Of Edinburgh, will be in the national capital, Ottawa, for ceremonies on the 1st July 1967 to mark the anniversary of the day 100 years ago when Canada came into existence as a sovereign nation. Subsequent to their visit to Ottawa, the Royal couple will sail through the St. Lawrence Seaway aboard the Royal yacht Britannia for a July 3rd visit to the Montreal site of Expo 67; on this occasion the Royal party will travel through the inland waterway, jointly built by Canada and the United States, which the Queen had ceremoniously opened with President Dwight D. Eisenhower in 1959. The itinerary at the World Fair includes brief visits to the British pavilion and to those erected by the Canadian provinces. At the conclusion of the Expo 67 visit the Royal party will return aboard the Britannia for overnight anchorage near Kingston, Ontario. Queen Elizabeth, who was born on the 21st of April 1926, succeeded to the Throne on the 6th February 1952. On the date of her succession, caused by the sudden death of her father, King George VI, in England, she was in Kenya enroute with her husband for a tour of Australia and New Zealand. Five months earlier the couple had visited Canada and the United States. The Coronation of Queen Elizabeth took place in historic Westminster Abbey on the 2nd June 1953. A son, Prince Charles, born on the 14th November 1948, later to be named Prince of Wales, and a daughter, Princess Anne, born on the 15th August 1950, were born prior to the Queen's accession to the Throne. Andrew, born on the 19th February 1960, was the first child born to a reigning British Sovereign for more than a century; a fourth child, Edward, was born on the 10th March 1964. Canada's Centennial Year Royal Visit stamp was designed and printed by the Canadian Bank Note Company Limited, Ottawa. To the right, in royal purple, it features an engraving of Her Majesty's likeness from a photograph by Anthony Buckley, of London, England; to the left, also in purple, appears Canada's Official Centennial symbol and the dates 1867 - 1967. The remaining elements of the design, including a symbolic branch of laurel leaves framing the Royal image, are printed in gold on a lighter gold background.