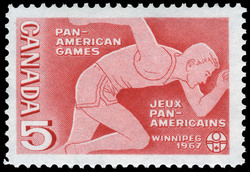 The fifth Pan-American Games, a major Canadian Centennial year event to be opened in Winnipeg by His Royal Highness the Duke of Edinburgh, are commemorated by this Canada Post Office 5¢ stamp. Duration of the Games is the 22nd July to the 7th August 1967. Held every four years, the Pan-American Games are the Olympics of the western hemisphere; this year's renewal is recognized as the largest sporting event ever held in North America. "Pan" is a prefix meaning "All" and the 1967 Pan-American Games are truly "All-American" with an expected representative group of athletes from some thirty-two countries. Brazil was the host country in 1963 when the event was staged in Sao Paulo; Chicago, U.S.A", was the site in 1959; Mexico City, Mexico, staged the event in 1955 and the first in the series was held in Buenos Aires, Argentina, in 1951. The motto of the Pan-American Games Society "America: Espirito, Sport, Fraternité" is a multi-lingual expression meaning "The American spirit of friendship through sports". It includes the four major languages of the western hemisphere: English, Spanish, Portuguese and French. Competition in the 1967 programme of some 400 events in twenty-four sports is open to athletes from all countries in the Americas. Thousands of contestants will vie for honours in stadia, playing fields and other facilities, valued in excess of $50,000,000, located in Greater Winnipeg and surrounding countryside. Winnipeg, Capital city of Province of Manitoba, is the fourth largest city in Canada. It is a fast-growing modern city with a Metropolitan population of some 500,000. Situated at the confluence of the Red and Assiniboine Rivers, it is 60 miles north of the U.S.A.-Canada border, almost midway between the Atlantic and Pacific Oceans. Canada's 1967 Pan-American Games stamp includes in its elements a reproduction of the 1967 Games symbol. It represents a competitor with the Canadian Maple Leaf on his shirt; his arms are outstretched in a sign of welcome to the contestants and visitors from many countries. First Day Cover service for the Pan-American Games stamp will be provided at the Winnipeg Post Office.