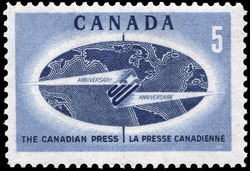 This 5¢ commemorative stamp marks the 50th Anniversary of The Canadian Press, a cooperative that makes no profit and declares no dividends. The Canadian Press is a news-gathering and news-distributing service which has been regarded as a unifying force in Canada since its founding during the wartime stresses of 1917. Each of the 103 Canadian daily newspapers represented in its membership, whether large or small, has an equal vote in the affairs of the association and in the election of Directors. The Directors are elected for two-year terms by regions. Since The Canadian Press was formed as a national newspaper association in 1917, twenty-two men prominent as newspaper directors in all parts of Canada have served as Presidents of the organization. The first to hold this office was E.F. Slack, Montreal, whose term extended from 1917 to 1920; St. Clair Balfour, Winnipeg, is the incumbent President. In 1951, after receiving their news in English for thirty-four years, the French-language members arranged with Canadian Press to set up Service in French. At the official inauguration, Prime Minister Louis St. Laurent described it as a major event in Canada's development as a nation. The designer of the C.P. stamp is William McLauchlan of Mount Albert, Ontario, who came to Canada from his native Glasgow, Scotland in 1951. It is the first design by Mr. McLauchlan selected for use on a Canadian postage stamp.