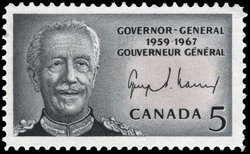 The date of this stamp is hidden in Vanier's right epaulette. With this commemorative stamp the Canada Post Office pays tribute to General the Right Honourable Georges Philias Vanier, the first native-born Canadian whose death occurred while serving his country as Governor General. General Vanier died on the 5th March 1957, thus ending the distinguished career of a soldier, diplomat and statesman whose culminating responsibilities were those of the Sovereigns' representative in Canada. He assumed office as Governor General on the 15th September 1959. Born in Montréal, P.Q. on the 23rd of April 1888, the late Governor General was the son of Philias Vanier and Margaret Maloney, both of Montréal; educated at Loyala College, and Laval University (B.A. 1906 LL.B. 1911) he was called to the Bar in 1911. On the 29th September 1921 he married Pauline Archer whose warmth and friendliness complemented her husband's dedicated occupancy of the Vice-Regal role. Assuming the office of Governor General, General Vanier said, in part: "If Canada is to attain the greatness worthy of it, each of us must say I ask only to serve." General Vanier was severely wounded while on active service during the years 1915-1918 and his gallantry in action won for him the M.C. with Bar, the D.S.O. and the 1915 Star. During the years 1925-28 he commanded the Royal 22nd Regiment at the Citadel, Québec. In 1917 he was created Chevalier of the Legion of Honour; Commander, Legion of Merit (U.S.) 1946; Knight of Justice of the Order of St. John of Jerusalem, 1959, and Knight Grand Cross of Magistral Grace of the Order of Malta, 1959. In the area of diplomacy, General Vanier had an equally distinguished career. He represented his country on many occasions prior to his retirement from the Diplomatic Service in 1953 at which time he had just completed nine years as Canadian Ambassador to France; he had previously served as Canadian Minister to France from 1939 to 1940.

Based on a photograph by Yousuf Karsh. Designed by Harvey Thomas Prosser. Portrait engraved by Yves Baril. Lettering engraved by Donald J. Mitchell.