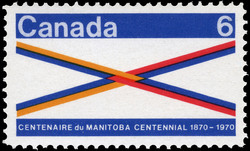 Manitoba, the first province to enter Confederation after the original four in 1867, occupies a central geographic position justifying the term of Keystone Province. It was Lord Dufferin who predicted that "Manitoba" is destined to be the keystone of a mighty arch of sister provinces stretching from the Atlantic to the Pacific". When it was created in 1870, Manitoba, by reason of its small area, quickly acquired the affectionate title of "the postage stamp province". Subsequent extensions of its boundaries, principally by Acts in 1881 and 1912, created today's province of 251,000 square miles extending some 761 miles northward from the international border. Although centrally located in the breadth of North America it has a 400 mile coastline on Hudson Bay with docking facilities at Churchill. The concept of Manitoba as a Prairie Province is questionable when statistical information reveals that 40,000 square miles of fresh water and 123,000 square miles of forest land jointly comprise nearly 65% of the province's total. Of the 100,000 lakes in Manitoba, there are 38,500 that are 80 acres or more in area. The modern, thriving capital city of Winnipeg, with a metropolitan population of more than one half million, can be regarded as the cross-roads of Canada. A diversification of the economy brings increasing prosperity to this young land, the population of which, nearly one million, is equally diversified. The names of settlements in Manitoba read like a roll-call of far away lands, their centres of population or their national heroes.