Centennial of the Northwest Territories, 1970 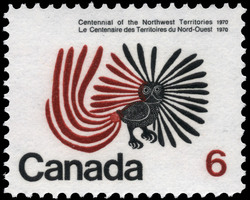 The relatively sparsely populated Northwest Territories' 1,304,903 square miles of Canada's nearly 4,000,000 square miles reflect an image of ever increasing importance as the area embarks upon 1970 festivities to mark its Centennial. Events of recent years have focussed the eyes of the world, on this resources-rich northern land. The extraction of nature's wealth for the economic good of the region has been accelerated by rapidly advancing technology. By an Act which also created the Province of Manitoba, given assent on the 12th of May 1870, the Northwest Territories came into being. It was not until 1963 that a full time Commissioner was appointed and charged with building up a territorial administration, located initially in the nation's capital, Ottawa, but to move into the Territories as soon as possible. In 1967, coinciding with Canada's Centennial celebrations, the administrative seat of government for the Territories was moved to Yellowknife, a capital which has since provided increasing evidence of man's success in creating a friendly environment in a frequently severe and sometimes hostile climate. A reproduction of Kenojuak's Enchanted Owl, one of the most prized prints to come from Eskimo artists in the Territories, was chosen for use on this stamp. The mother of four children, Kenojuak, in recognition of "merit, especially service to Canada and humanity at large", was awarded the Medal of Service of the Order of Canada in 1967. Most of her life has been spent at Itigajuak some thirty miles from Cape Dorset, Baffin Island.

Based on a stonecut print by Kenojuak Ashevak.