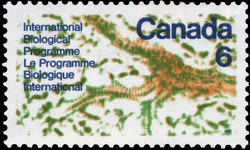 Canada is making a significant contribution to the preservation of the habitability of the earth through research performed by scientists in conjunction with the five-year International Biological Programme in which some sixty countries are participating. The Programme, which commenced on the 1st July, 1967, has as its theme "The Biological Basis of Productivity and Human Welfare." It is recognized that the rapidly increasing human population and the wide extent of malnutrition call for greatly increased food production coupled with rational management of natural resources. This can be achieved only on the basis of scientific knowledge, which, in many fields of biology and in many parts of the world, is considered to be inadequate. Human activities are creating, rapid and comprehensive changes in the environment, therefore, in terms of human welfare, the reason for the IBP lies in its promotion of basis knowledge relevant to the needs of man. The Programme calls for comparative studies of selected forests, grasslands, deserts, tundra, freshwater lakes, marine bays and estuaries, at different elevations and latitudes. The standing of the underlying factors which limit or regulate the ability of plants and animals to grow and multiply in different environments. Parallel studies on human welfare are concerned with such topics as growth, development and adaptability to changing conditions, conservation of ecological and genetic resources and biological control of insect pests. Probably the most important process which determines biological productivity is photosynthesis. This is the process which, directly or indirectly, provides all living systems with the necessary energy for growth and metabolism. In designing Canada's stamp, the artist has, therefore, symbolized the productivity theme of IBP by a microscopic view of the inside of a leaf, the familiar light-capturing organ where photosynthesis takes place. The thin section of leaf tissue which is depicted shows many cells containing tiny green bodies, called chloroplasts. The chloroplasts absorb light and convert a small percentage of it into sugar. Besides cells with chloroplasts, the microscopic view shows leaf veins. Some of the vein cells are reinforced with ribbing and are used to supply the water needed for photosynthesis which comes from the roots. Some of the other, more ordinary-looking vein cells are specialized for collecting and moving the sugar produced by the chloroplasts to other parts of the plant where it is used for growth and development. This stamp is issued in recognition of the fact that Canada is one of the major supporters of and contributors to the IBP. The cooperative effort of more than one hundred and fifty scientists, students, and assistants in different disciplines from Canadian university and government laboratories are engaged in detailed studies of the functioning of prairie grasslands, temperate and arctic lakes, marine bays and estuaries, as well as in studies of circumpolar peoples and other aspects of the Programme. The Canadian Committee for the International Council of Canada is responsible for coordinating the planning, financing and reporting of the Canadian participants in the programme.