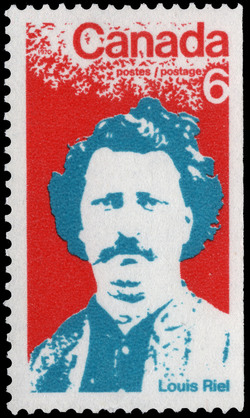 The commemoration of Louis Riel occurs during the year which is widely recognized as the one hundredth anniversary of the apex of his career. The offspring of a respected family whose roots were deep in the Red River country, Riel, referred to by historians as one of the decisive figures in Canada's formative years, was an articulate and intelligent but enigmatic figure endowed with a deep sense of "mission". Although some have place his birthdate as 1847, by his own account he was born at St. Boniface on the 23rd October 1844, the son of Louis Riel, a metis, and Julie de Lagemaundière, the daughter of the first white woman in the North West. Beginning in 1858 he spend several years in Montreal attending a college to which he had been sent by Bishop Taché of St. Boniface. The influx of settlers from eastern areas of the country into what was to eventually become the provinces of Manitoba and Saskatchewan provoked opposition among the predominantly métis populations, first in the Red River Rising of 1869-70 and later in the North West Rebellion in 1885. In the first instance, the Government of Canada and the Government of Great Britain were negotiating transfer of western territories from the Hudson's Bay Company to the control of the Canadian Government. In an administrative vacuum to which transitional events had contributed, Louis Riel accepted his role as leader among his people and became head of the Council of Assiniboia. It is clear that the métis regarded the negotiations for transfer of the area as a threat to their established customs, rights, land titles and to the very fabric of their society. Riel and his people insisted upon their right to be heard and pressed upon the Government of Canada the principle of consultation before annexation. The procedure to which they subscribed subsequently proved to be fundamental to the Canadian Federal System. In the Red River Rising, the advance of military forces sent by the Canadian Government jeopardized Riel's safety and ended his temporary control of Fort Garry. But this was not to be the end of his leadership in the métis' cause. Intervening years saw his election to the Federal Parliament, from which he was eventually expelled. In 1884 he returned to Canada from the United States to lead his people who considered their new settlement on the banks of the North Saskatchewan River endangered by the continuing advance of agricultural settlers and the construction of a railway from the east. Armed rebellion in this instance brought swift reaction from the Canadian Government and the newly constructed railway meant forces could be quickly transported to the "end of steel" at Regina. Sharp and bitter clashes ensued but in the end Riel became a prisoner of the Government forces whose leader General Middleton was then able to make terms with the rebellions faction. Riels' turbulent life ended on a scaffold at Regina on 16th November 1885. He had been tried and convicted in the same city on a charge of treason.

Based on a photograph by William James Topley.