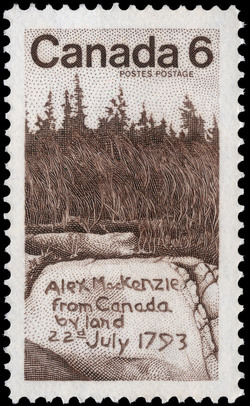 Alexander Mackenzie, whose trailblazing journeys place him in the forefront of North American explorers, died 150 years ago in his native Scotland. Mackenzie's most spectacular achievement came in July, 1793 when, at the age of 29, he completed the first crossing of the North American continent north of Mexico. It was in 1774 , at the age of 10, after the death of his mother, that Mackenzie was taken by his father to New York and, in 1778, to Montreal where, one year later, he entered the service of a fur trading company. Not long after his arrival at Athabasca in 1787 he commenced planning a trip which, in 1789, was to make him the first to reach the Arctic at the mouth of the mighty river named in his honour. Bitterly disappointed at not finding the Pacific, he spent four years studying and planning before he set out through mountainous and unmapped terrain leading to the goal which he achieved years in advance of any other explorer. Impressed by the mighty volume of the Fraser River, he eventually turned westward from its course on a route which brought him to Dean Channel, a few miles from the present day community of Ocean Falls, B.C. Here, in contrast with the wooden marker he had erected at the mouth of the Mackenzie, he used a mixture of vermilion and melted grease to paint the now famous inscription on the southeast face of a rock on which his party had rested over-night. The inscription, since chiselled on the rock face and filled with red cement, carries the simple message "Alex Mackenzie from Canada by land 22nd July 1793". Nearby, a monument, erected by the Historic Sites and Monuments Board of Canada in 1936, bears a bronze tablet on which is printed, "This rock is the western terminus of the first journey across the continent of North America. It was made by Alexander Mackenzie of the North West Company, who, with his nine companions, arrived at this spot on the 21st July 1793. Mackenzie, by observations, ascertained his positions, spent the night here, and, after writing on the southeast face the words now cut therein, retraced his course to Lake Athabasca. This transcontinental journey preceded by more than then years that of Lewis and Clark". Mackenzie, having accomplished his objective, wasted little time in setting out on his return trip unaware that his arrival on the Pacific coast had been within a very short time of Captain Vancouver's survey voyage in the same general area. News of his achievements preceded his return to Britain where he was rewarded with a knighthood conferred by King George III in 1802. Later in the same year Mackenzie returned to Montreal to pursue his interest in the fur trade. From 1804 to 1808 he sat as a member of the Lower Canada Assembly, retiring in the latter year to Scotland. In 1832, subsequent to his death in 1820, his retirement home, Avoch House, was gutted in a fire which destroyed the major part of his personal relics and papers.