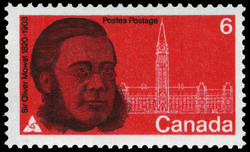 The hidden date for this stamp can be found in Sir Oliver Mowat's beard.

Oliver Mowat, one of Canada's Fathers of Confederation, was born on the 22nd July 1820 at Kingston, Ontario, a community then regarded as the most important town in Upper Canada. He served his province and his country in many important roles before his death on the 19th April 1903 at Government House after some six years as Lieutenant-Governor of the province of Ontario. A man who took pride in being regarded as a Christian statesman, Mowat's success in public life was widely attributed to a popularity and prestige gained through his tact and integrity and his firm espousal of provincial rights. He was the eldest of five children whose parents, John Mowat and Helen Levack, both Scottish-born, had settled as colonists on a two hundred acre grant of land near Kingston. The grant had ben secured by John Mowat who, having first come to Canada with British forces in 1814, secured his discharge in order to take up life in the pioneer land to which in later years he brought his bride from Scotland. Oliver Mowat embarked upon a legal career when, as a sixteen year old student-at-law, he entered the Kingston office of John A. Macdonald, a man destined to be Canada's first Prime Minister after Confederation in 1867. Mowat was called to the Bar of Upper Canada in 1841 and his elevation to Q.C. came in 1856. He first entered public life when he was elected as an alderman in the city of Toronto in December 1856, an office which led to his recognition as founder of the parks system. His entry into the political arena came in 1857 when he was elected to the legislative assembly to represent South Ontario. He served as provincial secretary in 1858 and as Postmaster General in 1863-1864. As a delegate from Upper Canada to the historic Quebec Conference, commencing on 10th October 1864, he played a significant role in defending the right of the provinces to retain substantial powers. At this assemblage leading to Confederation, he is recognized to have contributed greatly to the relatively swift adoption of 72 resolutions prior to October 29th. Oliver Mowat's efforts in support of Confederation were terminated by a retirement from politics on the 14th November 1864 when he was appointed to the Bench as a vice-chancellor of Upper Canada. Almost eight years later, in October 1872, he re-entered political field to become Premier of Ontario on the 29th November. He remained at the head of Ontario's Government for almost a quarter of a century before his efforts on this field were terminated by his appointment to the Senate in 1896. In addition to serving as Government leader he held the portfolio of Minister of Justice before he again retired from politics to accept his final role as Lieutenant-Governor in 1897. In 1892 Oliver Mowat was created Knight Commonder of the Order of St. Micheal and St. George. On 22nd June 1897 he received the Grand Cross of the same order.