The Group of Seven 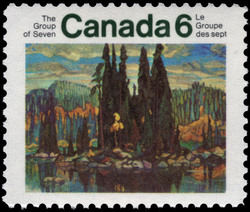 The passage of time has resulted in an enthusiastic acceptance and appreciation of the Canadian identity portrayed so vividly in paintings by the Group of Seven which, since its founding fifty years ago, has influenced if not dominated Canadian landscaping paintings. The Group of Seven's formative years could be best be described as 1910 to 1913, in an era of expanding trade and increasing immigration. However, the coming of World War I, in 1914, temporarily dimmed the "national movement" in art which was then taking place. It was not until 1919, with war a thing of the past, that members of the yet to be named group resumed interpreting Canada's rugged wilderness terrain while living in the equally rugged environment of a railway freight car. Their style eventually brought distinction to Canada and to them undying fame. Today, their works, so well known, could almost be regarded as national symbols. In the years immediately preceding 1920 the same group of kindred spirits became known as the Algonquin school because of the frequency with which they painted in Ontario's wilderness Algonquin Park. And it was in Algonquin Park, too, that tragedy struck with the 1917 canoe accident drowning of Tom Thomson, a gifted artist who painted with members of the eventual Group of Seven. Thomson's paintings created during a brief six years career are frequently associated with those of the Group formed three years after his death. Original members of the Group of Seven in 1920 were Franklin Carmicheal, Lawren Harris, A.Y. Jackson, Frank Johnston, Arthur Lismer, J.E.H. MacDonald and F.H. Varley. Johnston's withdrawal in 1922 reduced the membership to six until Alfred Casson joined in 1926. Two more, one being Edwin H. Holgate in 1931 and the other Lemoine FitzGerald in 1932, joined the ranks. There was little if any organized structure but it is recognized that the Group existed in a very real sense until it evolved into another and broader body, the Canadian Group of Painters, in 1933. Results achieved by the Group of Seven, with its concentration on design and colour, were far removed from the impressionism of the day. As described by Canada's National Gallery in Ottawa: "... they brought to the Canadian landscape the buoyant post-impressionism of Van Gogh and they painted Canada as nobody had ever thought of painting it before. The wild colours of a Canadian autumn; the solitary lakes of northland; the monolithic islands of Lake Superior; the glacier-tortured landscape of the Laurentian Shield; the grim exhaustion of a hillside emerging from four months of winter snow - this was Canada as it is, a land like none other, and Canadians abruptly recognized it as their own." Although paintings created by the Group of Seven now occupy an extremely high place in Canada's artistic heritage, public acceptance was far from unanimous in the Group's early days. A derogatory "hot mush" was frequently resorted to in describing the fresh, bold concepts used in interpreting the rugged landscapes peculiar to Canada. In some instances public concern was reflected in statements that the distribution of such paintings would render a disservice by discouraging immigration to our shores.