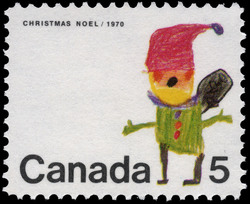 The meaning of Christmas to the under thirteen year old children of Canada has been captured in the representative group of twelve delightful drawings chosen from tens of thousands of submissions in the Canada Post Office stamp design project. The designation of 1970 as International Education Year places an added significance on the use of children's designs on Canada's Christmas stamps. It was in mid-November 1969 that this venture was announced. The timing was a happy choice since it made possible an expression of "What Christmas Means to Me" based on actual experiences and happenings during the season which holds a special magic for the young. The cooperation of Departments of Education throughout Canada lightened the administrative burden, similarly the willing assistance of art gallery directors and other educators smoothed the path in the preliminary selection of designs. Some forty or fifty paintings and drawings were referred to Ottawa from each of the regional judging centres established at the Vacouver Art Gallery, the Edmonton Art Gallery, the Norman Mackenzie Art Gallery in Regina, the Winnipeg Art Gallery, the Art Gallery of Ontario in Toronto, the Montreal Museum of Fine Arts, the Owens Art Gallery at Fredericton, the Nova Scotia College of Art at Halifax, the Confederation Art Gallery and Museum at Charlottetown and the Arts and Culture Centre at St. John's. The final adjudication of approximately five hundred representative submissions at Post Office Headquarters, Ottawa, performed by the Department's Design Advisory Committee, resulted in the selection of twelve brush and crayon creations. These have now been reproduced with great fidelity as postage stamps. The five-cent issues are based on submissions by Lisa Wilson age 8, of Kamloops, British Columbia; Donna Niskala, age 9, of Macrorie, Saskatchewan; Anthony Martin, age 5, of Marius, Manitoba; Dwayne Durham, age 7, of Fort Erie, Ontario, and Manon Lecompte, age 9, of Laprairie, Quebec. On the six-cent stamps are drawings by Jean Pomperleau, age 8, of St. Paul, Alberta; Janet McKinney, age 8, of Saint John, New Brunswick; Nancy Whatley, age 10, of Armdale, Nova Scotia; Joseph MacMillan, age 12, of Summerville, Prince Edward Island, and Eugene Battacharya, age 7, of St. John's, Newfoundland. The ten-cent denomination has a drawing by Corrine Fortier, age 10, of St. Leon, Manitoba, and the fifteen-cent value is based on one by Janis Dojcak, age 10, of Flin Flon, Manitoba. These children, in addition to enjoying that special experience of seeing their drawings on their nation's stamps, received special treats arranged by the Post Office Department. Included was an expenses paid trip to see their national capital city, Ottawa. The uncontrived and innocent beauty of art fashioned by talented youngsters gives ample evidence that this special project was a spark which ignited the imagination and ready cooperation of children and gave them encouragement at an early age to participate in the affairs of their country. That the challenge to the young was so effectively grasped is a source of tremendous satisfaction.