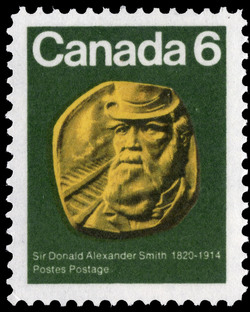 The hidden date can be found on the bottom of the medallion. Among the builders of Canada a special niche is occupied by Donald Alexander Smith who drove the ceremonial goldenrail-road spike at Craigellachie, B.C., on the 7th November 1885 to complete a ribbon of steel across the nation. At Smith's side on that historic occasion was Sandford Fleming, chief engineer in charge of surveying for the new line, who is also remembered as the designer of Canada's first stamp, the Province of Canada three-penny beaver of 1851. Born in humble surroundings at Forres, Moray, Scotland, in 1820, Smith entered the Hudson's Bay Company service in 1838. Esquimaux Bay on the Labrador coast was one of the several locations where he laboured to diversify the Company's interests. It is recognized however, that his 1969 promotion to head of the Company's Montreal department, eastern Canada and Labrador, was the result of a favourable impression created during a visit to England in 1864. From this posting he went on to become Governor of the Company in 1899. At the time of the Red River Uprising of 1869-70, known to be familiar with the situation on the western plains, he was instructed by his London headquarters to aid the Canadian Government during negotiations for the transfer of the Hudson's Bay Company territory. Sir John A. Macdonald appointed him commissioner to Red River to present the government's case to the English and the Metis, a task in which others had failed. Through delicate manoeuvring he won a chance to speak before a gathering of the interested parties assembled to choose delegates to reach an understanding with the Canadian government. Smith's mission ended when violence broke out at Fort Garry. Subsequently, the delegates to Ottawa were able to report that the Manitoba Act, as a result of their insistence, contained many safeguards of their rights. Smith represented Selkirk in the House of Commons from 1871 to 1880, sitting also as member for Winnipeg in the provincial legislature from 1870 to 1874. When dual representation was abolished he elected to retain his seat in the House of Commons. Always interested in railways, he realized the Canadian west needed immigrants to fulfil a great potential. British Columbia had agreed to enter Confederation on promise that a railway would be built and Smith, although not officially a member of the 1880 syndicate formed to built the line, risked his personal fortune to keep the venture afloat. The honour and recognition of his persistence came with an invitation to drive the last spike in 1885, the year before he was knighted by Queen Victoria. He had been out of politics since 1880, but returned to represent Montreal West in 1887. He sat for that constituency until 1896 when he retired to accept an appointment as high commissioner to Great Britain, a post he held until his death in 1914. While high commissioner, Smith toured England promoting emigration to Canada. He was raised to the peerage as Baron Strathcona and Mount Royal in 1897.. Throughout his life, Smith, noted for keeping his own counsel, stayed in the background of the history he helped to write.

Based on a medallion by Dora de Pédery-Hunt.