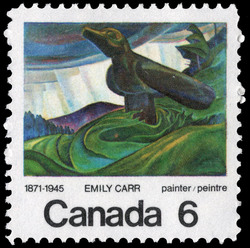 Almost until her death on 2nd March 1945 Emily Carr remained unrecognized as one of Canada's greatest artists and writers. Commemorating the 100th anniversary of her birth, this stamp reproduces one of her most famous paintings, "Big Raven". All through her life she went to the forests of British Columbia, to listen and look, and to paint them as they had never been painted before. Unlike her paintings, which were slow in gaining acceptance, her first book, "Klee Wyck", a series of tales and sketches of West Coast Indians, won the Governor General's Award for non-fiction in 1941. Klee Wyck, "the laughing one", was the name given to her by the Indians whose way of life she enjoyed recording with brush or pen. Born in Victoria, B.C., on 13th December 1871, Emily matured with a spirit of revolt against authority. Her independence of mind and natural artistic talent led her to art schools and studios from San Francisco to Paris. In 1912 she returned from a trip to Paris where she had learned about impressionism, experimenting with light and colour to paint what was felt as well as what was seen. She splashed paint until it glowed with life to make bright, light-filled canvases. When Emily held an exhibition of paintings she had completed in France, she was ridiculed by both critics and publics. Schools where she had taught now refused to employ her. Victorians labelled her a 41-year-old failure. For the next fifteen years Emily Carr's talents went unrecognized because she had returned to Canada at a time when there was no sympathy with modern painting. She turned her back on life as a full-time artist to become a landlady, dog-breeder, and pottery-maker. In 1927, a telephone call from Eric Brown, then Director of the National Gallery, persuaded her to come east and lend fifty canvases for an exhibition in Ottawa. She found that critics and artists, notably Lawren Harris of the Group of Seven, understood her work and liked it. The group's interest gave her new life. She began painting again, her theme all British Columbia. She went again and again to the sea, Indian villages, and to her beloved woods, sketching steadily for the large canvases that she painted later in her studio. In 1933 she became a member of the Canadian Group of Painters. Heart disease crippled Emily in later years, but she was not angered, only saddened when she had to give up some of her favourite pets after a heart attack at 70. Her creative urge was stronger than ever, and she stole away from her doctor and sister into the woods, to put on canvas startling, vivid sweeps of dancing trees. When she was hospitalized, she wrote "Klee Wyck", and soon other books followed, written from her experiences of childhood and life in early Victoria. "Growing Pains", her autobiography, was not published until after her death in 1945. She painted and wrote about her own province because she loved it so passionately. Emily Carr was a Canadian who sought to interpret her country to others and succeeded.

Based on a painting by Emily Carr Designed by William Rueter