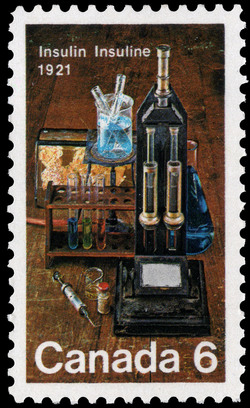 Fifty years ago, medical history was made in Canada when insulin, the hormone used in the treatment of diabetes, was isolated. millions of doomed diabetics were given the gift of life and Canada took a giant step into this century's medical research as a result of the work of two medical scientists, Dr. Frederick G. Banting and Dr. Charles H. Best. They laboured through the hot summer of 1921 in a laboratory of the University of Toronto Medical School to find a remedy for diabetes, a condition in which the body is unable to efficiently use sugars and other food materials. With insulin, the life expectancy of diabetics increased to near normal for most sufferers. Almost overnight the picture has changed as the death rate began to drop. Children, formerly the worst sufferers from diabetes since it was invariably fatal to them, have become the greatest beneficiaries of insulin. In 1923, one of the co-discoverers, Dr. Banting, was awarded the Nobel Prize in Medicine, the first Nobel Prize won by a Canadian in any field. This recognition was an inspiration to Canadian medicine in that a more realistic amount of the nation's resources was devoted to medical research. Dr. Banting perished tragically and prematurely on 21st February, 1941 in the crash of an R.A.F. Ferry Command Hudson aircraft in the bleak wilds of northern Newfoundland. "He died as he lived, in the service of his country and of humanity". The unique characteristics of this stamp prompted the following comments from members of the Canada Post Office Design Advisory Committee: We recognized an immediate difficulty in trying to find a design to commemorate the discovery of something that in itself could not be illustrated. One possibility which occured to us was a drawing or photograph of the original laboratory in which Banting and Best worked and which is now preserved at the Ontario Science Centre. We turned to Mr. Ray Webber as a man who is particularly able to give life to inanimate objects and he certainly surpassed our expectations. In this photograph, which we believe is a first in stamp design, Webber has taken actual instruments and materials used by Banting and Best to create a still life of charm and beauty. It contains moreover, a feeling about the human act of discovery and it puts the viewer in direct touch with the minds and the hands of the scientists themselves.