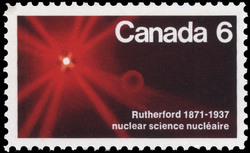 The broad and fruitful research program in the field of radioactivity undertaken by Ernest Rutherford at Montreal's McGill Universtity provided a tremendous impetus to physical research in Canada in the late 1880's and early 1900's. Knighted in 1914, this native of New Zealand, born on 30th August, 1871, was created Baron Rutherford of Nelson, New Zealand, in 1931, some six years before his death at Cambridge, England, on 19th October 1937. He came to McGill to begin his teaching career as professor of physics in 1898 and remained until 1907. Returning in England he continued his teaching and research at the University of Manchester. In 1908 he was awarded a Nobel Prize and in 1919 he accepted an invitation to continue his work at Cambridge University. He received the Copley medal of the Royal Society in 1922, in turn was President of the British Association for the Advancement of Science and the Royal Society, and was appointed to the Order of Merit in 1925. Energetic, robust and dynamic, he was a man of compelling personality possessed of a bright lively nature. With the remarkable capability of devising the precise experiment to prove a specific theory, he is recognized as one of the men who triggered the chain reaction of atomic research which so radically changed the world. Of his work at McGill in Canada, it has been said that he made this institution at that time the world centre of research in atomic physics. Describing their utilization of Ray Webber's imaginative photographic techniques for this stamp, members of the Canada Post Office Design Advisory Committee said: Rutherford's work on nuclear science was a problem of trying to make the invisible real in a symbolic and visible way. Although none of us can see atoms, most of us have an image of them as a sort of miniature planet circling around a nucleus. Mr. Webber has caught this image with great skill, and has added to it the sense of energy which is contained in the burst of light. It symbolizes the great energy that the harnessing of the atom has given to us and which, unseen, affects so much of all our lives. We think it is a very fitting and demonstrative recognition of Rutherford and his work.