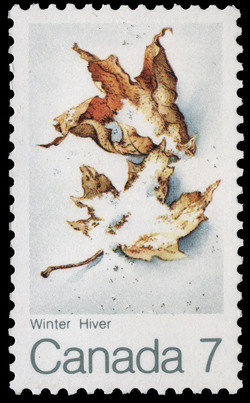 Memories of sun-filled summer days and the anticipation of new growth in the spring are prompted by maple leaves in the beauty of winter snow. This is the fourth and final stamp in a series of issues released during the appropriate seasons of 1971 under the title "Maple Leaf in Four Seasons". The evolution of symbols comparable to Canada's Maple Leaf has a deep-rooted significance in the minds of man. References to the maple leaf are interlaced in the annals of Canada's comparatively short history and researches have concluded that our symbol was looked upon as a fit emblem as early as the seventeenth century. Many years were to pass before the formalization of these passing references, however, in 1868 the maple leaf appeared in the Coats of Arms granted to the provinces of Quebec and Ontario by Queen Victoria. The Canadian Coat of Arms, authorized in 1921, included a similar sprig of maple leaves as a distinctively Canadian symbol. On the 15th February 1965 Canada's National Flag, centred by a stylized red maple leaf, first flew from the mast heads of Federal establishments throughout the world. Recommended by the House of Commons on the 14th December and by the Senate on the 17th December 1964, it had received Royal approval on Christmas Eve of the same year. It is recognized that the genus Acer, common to the northern hemisphere, once had a natural habitat extending into the Arctic regions. The genus Dipteronia, also part of the maple family of plants, is found in central and southern China. Ten species of maple trees native to Canada are the Vine, Broadleaf, Douglas, Mountain, Striped, Red, Silver, Sugar, Black and Manitoba. The winged seeds or Samaras, the fruit of the maple, often referred to as "Keys", mature, depending on the specific species, at varying periods throughout the months of growth. Falling to the ground, those that find suitable soil germinate as fledgling plants which, in some species, eventually lead to tall timber with a valuable commercial usage. The re-birth of life after a winter hibernation is exemplified in the setting of a maple key in the fresh, delicate greens of early spring. The full-bodied summer greens lead in turn to the glory and splendour of autumn red and golds which have a magnificence seldom excelled in nature. In winter snow the maple leaf remains an object of infinite beauty. Maple syrup and sugar, products concentrated from the sap of the maple tree, is a crop unique to North America. Delicious confections, they are also one of the oldest crops yielded by Canada's forests. Native Indians in the Great Lakes and St. Lawrence River regions are known to have tapped trees for their succulent products prior to the arrival of white settlers. Legend has it that an Indian woman discovered the peculiar qualities of maple sap when she accidentally used it instead of water to boil venison provided by the hunters of her tribe. Today, with a fluctuating yield because of varying year to year climatic variations, maple syrup production, principally in the provinces of Nova Scotia, New Brunswick, Quebec and Ontario, has a yearly value of between ten and fifteen million dollars. As one of the great food producers of the world, it is appropriate that Canada has a leaf as a national emblem. Leaves, the basic food producers, manufacture food for plants which ultimately nourish all creatures of the land.