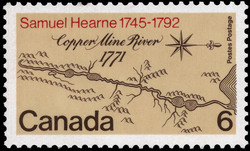 In July, 1771, two hundred years ago, Samuel Hearne became the first European to reach the Coppermine River and Canada's Arctic coast overland. His carefully written record of his five thousand mile trek, through one of the most forbidding territories in the world, was a great contribution to early knowledge of the northern Indians, Arctic wildlife and geography. Born in London, England, in 1745, Hearne went to sea while still a child. In the service of the Hudson's Bay Company at Fort Prince of Wales, he was commissioned to search for a north-west passage and to locate a copper mine, the existence of which was claimed in the earlier reports from Indian leaders. Two abortive attempts to reach his goal, one covering a span of nine months, failed to discourage Hearne. The third venture was inspired by a chance meeting with Matanobbee enabled Hearne to reach his destination but his expectations of finding a north-west passage or a mine rich in copper were not fulfilled. In 1774 Hearne founded the Company'first inland post, Cumberland House, in what is now east-central Saskatchewan. He retired in 1787, living in London until 1792 when he died at the age of 47. His journal, published three years after his death, remains a classic in the annals of Canadian exploration.