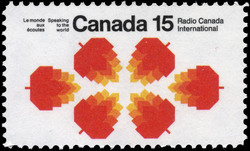 Entering the second quarter century of its existence, the Canadian Broadcasting Corporation's shortwave transmission service, Radio Canada International, embarks upon a programme of improvements in 1971 with the inaugural of powerful new transmitters. "Speaking to the World" is an apt phrase in describing shortwave programmes provided by Radio Canada International. The Service, officially inaugurated on the 25 February 1945 as the result of an Order in Council signed some two and one half years previously, was founded on multiple recognized needs. As expressed at the time of inception, the existing needs were not only to provide members of the Canadian Armed Forces abroad with news and entertainment from home, but to project Canada to listeners in other countries. Other factors were the stimulation of an interchange of trade and the promotion of an exchange of programmes with other countries. In addition to providing service to the peoples of other lands and the Canadian Armed Forces, the transmitters near Sackville, New Brunswick, have a domestic usage in providing daily broadcasting to people in Canada's remote northern regions. In response to multi-language broadcasts, Radio Canada International has received more than one million direct reports from listeners, some 82, 722 tabulated in 1969 alone. For more than seven years philatelists around the world have been learning about Canada and Canadian Stamps through a regular programme created for their interest.