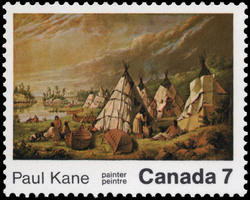 Boyhood dreams of Paul Kane, brought to fruition by dogged perseverance, provided by Canada with a remarkable pictorial record of early life among the native peoples. Widely recognized for his paintings of Indians and their way of life, Kane also gave a vivid insight into the same subject through what is now regarded as a classic descriptive journal "Wanderings of an Artist Among the Indians of North America from Canada to Vancouver's Island and Oregon through the Hudson's Bay Company's Territory and Back Again". Paul Kane came to this continent at an early age from Ireland where he was born in County Cork in 1810. Researchers have agreed that his family name, changed to Kane at an unknown date, has been shown in early family records as Keane. His days as a boy in York, a tiny pioneer settlement later to become the city of Toronto, provided him with frequent friendly contacts with the Mississaugas who then frequented the shores of Lake Ontario. Kane undoubtedly made comparisons between his pioneer settlement area and the more picturesque aspects of life among the Indians. Dreams of a sojourn through the hinterlands to record the affairs of Indians in remote areas, implanted in his mind at an early age, were not to be realized for a quarter of a century. In his 26th year, having already executed portrait commissions for notables of the day, Kane travelled to the United States where he spent some four years preparatory to journeying to Europe in 1841. For another four years he visited many areas of the Continent, Africa and Britain in seeking a refinement of his naturel talent. Returning to Canada he pursued the boyhood dreams about which he wrote "I determined to devote whatever talents and proficiency I possessed to the painting of a series of pictures illustrative of the North American Indians and scenery". That Kane achieved his ambition is evidenced by the respect in which his paintings are held today. His works, the original sketches made under conditions which would discourage a less ardent craftsman, gain particular recognition for an accurate recording of facial types and the details of costume. Reflecting a style acquired during years overseas, his paintings illustrate subjects and scenes which are completely Canadian. Constantly risking great danger and utilizing virtually every known pioneer form of transportation, Kane secured the principal part of his sketches of Indian life during two journeys, one commencing in 1845 and a more ambitious expedition from 1846 to 1848 which took him to the Pacific coast. On one occasion, riding with his friends the Indians in a buffalo hunt, Kane dismounted from his horse to make a quick sketch of an outstanding bull in the herd. The enraged beast charged, forcing the artist into a lifesaving retreat. Undismayed, Kane reorganized his approach and eventually obtained the sketch he desired. It has been said that Kane gave increasing evidence of a quiet and reserved manner reminiscent of the Indians with whom he spent many years. He died on the 20th February 1871. In the quiet of midtown St. James's Cemetery, Toronto, a stone was erected to commemorate one of Canada's most remarkable pioneer painters.

Based on a painting by Paul Kane Designed by William Rueter