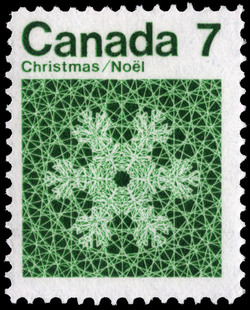 Snowflakes, tiny gossamer crystals whose myriad variety of forms defy man's efforts to find an identical pair, provided the inspiration for designs on 1971 Canadian Christmas stamps. This is eighth consecutive year in which the Canada Post Office has produced special issues for use on the nation's Christmas mail. Through centuries of time, men and women have responded to the infinite beauty of snow. Some, amidst the hush of a winter storm, have recalled the words of the Lord in The Book of Job (Verse 22, Chapter 38) - "Hast thou entered into the treasures of snow? or hast thou seen the treasures of the hail." Many have devoted virtually all their lives to analysing and classifying snow crystals. With photographs or drawings they have recorded their findings for the information of others. Here, too, the inherent ingenuity and inquisitiveness of man comes into focus in the development of a technique that permits the trapping of snow crystals between thin layers of fast-setting plastic to preserve forever their beauty in the form of a permanent cast. Harmless in the palm of the hand, fragile and delicate snow crystals, by sheer volume and weight, can paralyse modern communities as they fall in countless millions. Offsetting any disadvantages of the snows, the people's health and the nation's economy gain from a mushrooming snow-sport industry that capitalizes on a phenomenon of nature to which there is not such an easy access in many parts of the world. The vast reaches of Canada include areas of comparatively little precipitation in the form of snow. Most regions receive moderate to very heavy snowfalls, the latter including interior areas of British Columbia where the yearly average approaches thirty feet. Snowflake designs reproduced on the 1971 Christmas issues are creations of Miss Lisl Levinsohn, of Toronto, whose intricate pen drawings are considered by many to be among the best of the kind in the world. In reproducing the snowflake designs, the contemporary style and fine delineation of line have been preserved by special attention to printing techniques. The lower denomintations are examples of creating a reverse image through the use of engraving. Higher values employ the technique of engraving to superimpose lines of silver ink upon a ground and field printed on two colours by the lithographic process. Responding to the potential serenity of life on the shores of Lake Ontario, Miss Levinsohn emigrated to Canada in 1964 from the United States where she had lived after leaving her native Vienna, Austria, as a young child in 1937. Prior to adopting Canada as her home, professional figure skating, advertising, drafting, designing and mathematics had occupied her time, principally in the New York area. Although youthful aspirations pointed her to a career in writing, two years after leaving the United States she began to produce the drawings, frequently consisting of some sixty-seven thousand carefully plotted lines, which have since gained international recognition.