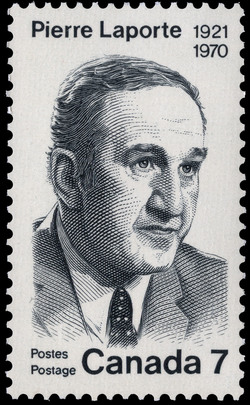 Pierre Laporte, a Canadian who gave unstintingly of his talents during years of service in public office, is commemorated during the 50th anniversary of the year in which he was born. In 1970, Mr. Laporte suffered a tragic and untimely death at the hands of kidnappers. On 10th October of that year he was abducted by members of the Front de Libération du Québec while playing with his son and a nephew in front of his St. Lambert home. Several days later his assassination was announced by the F.L.Q. Born on the 27th February 1921, Mr. Laporte obtained his B.A. at the Collège de l'Assomption. He studied law at the University of Montreal and was admitted to the Bar of the Province of Quebec in 1945. He twice won the Villeneuve trophy for debating in inter-university competitions. As a young man he served as Chairman of many Montreal Young Chamber of Commerce committees before being elected Vice-President of the organization. For many years, commencing in 1947, he was employed as a journalist with a Montreal daily newspaper, "Le Devoir", where he acquired the reputation of a well-informed and objective writer while serving as parliamentary reporter at the Quebec Legislative Assembly. A natural interest in parliamentary affaires was heightened as he reported debates of the Assembly, various committees, the Legislative Council and different departments of the provincial administration. Mr. Laporte's entry into Quebec provincial politics came when he gained a seat in a by-election on 14th December 1961. In the following year, having retained his seat in the general election of 14th November, he won dual honours by being appointed Minister of Municipal Affairs and becoming the first man appointed to the office of Parliamentary Leader of the Government. Three years later he was appointed Minister of Cultural Affairs. Re-elected in the general election of 1966, Mr. Laporte was named President of his party's Caucus and Parliamentary Leader of the Opposition. The attainment of a majority by his party in the provincial election of 1970 coincided with his re-election in the County of Chambly. He assumed a prominent role in the new Cabinet and was named Minister of Labour and Manpower, Minister of Immigration, and Parliamentary Leader. Widespread respect was won by Mr. Laporte by his dedication to the political career to which he had committed himself. The determined pursuit of his aims, coupled with a tremendous attention to detail and a capacity for hard work, won the admiration of a wide circle of people with whom he was acquainted. In private life he was a man devoted to his family. The son of a physician, he was married in 1945 to Françoise Brouillet. The couple had two children, Claire and Jean. The design and engraving of the Pierre Laporte commemorative issue is by George A. Gundersen, British American Bank Note Company Limited, Ottawa. The finely engraved portrait sympathetically portrays the inner human qualities captured in a photograph by Michel Giroux, of Montreal.