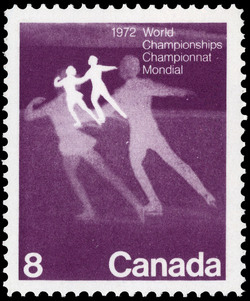 Figure skating, the drawing of figures on ice, is one of the most scientific and artistic of sports. It is also the most difficult, requiring skill in plain skating, a high degree of body control and assiduous practice. Skating, which dates back to at least the 8th century, was at first simply a means of moving easily and quickly over ice. The earliest known skated consisted of bone runners laced to the feet with thongs. Skates with steel blades fixed in wooden soles were probably used in the Netherlands around 1250. This was the start of skating as we know it. The history of skating can be loosely traced by casual references to it in literature. In the 12th century, for example, William Fitzstephens in his "Description of the City of London" describes young men who "tye bones to their feete and under their heels, and shoving themselves with a little picked staffe doe slide swiftlie as a bird flyeth in the air or an arrow out of a crossbow." Skating is widely recorded in art as well. A woodcut by Pieter Brueghel the Elder, dated 1448, illustrates the skating accident which befell St. Lidwina, patron saint of skaters, in 1396. Until the middle of the 19th century, the "English" style of skating, which was staid, rigid and precise, was predominant. But in 1864, Jackson Haines, originally a dancing master, exploited his ballet training to the full and stunned Europe by the beauty and flowing ease of his skating movements. Thus was the International style born. Louis Rubenstein, the Canadian who won the first international skating competition in 1890 in St. Petersburg, Russia, was the first president of the Amateur Skating Association of Canada, which later became the Canadian Figure Skating Association. In 1947 the Association was elected to the International Skating Union. In 1905 the first Canadian National Championships were held, and in 1924 Canada was represented for the first time in World and Olympic Championships. Although Canadian skaters gave creditable performances from the beginning, it wasn't until 1947 that Canada won a world championship. In that year, and again in 1948, Barbara Ann Scott won the Ladies World Championship. This was the first time a world figure skating championship left Europe. Top honours have gone to several other Canadians: in pairs competition, Frances Dafoe and Norris Bowden, Barbara Wagner and Robert Paul, and Maria and Otto Jelinek have all won one or more world championships; Donald Jackson, Donald McPherson and Petra Burka have all been world champions in singles events. Any country that is a member of the International Skating Union is entitled to entre one skater, or pair of skaters, in each category. If in the previous year's competition a country placed in the top ten, it is then permitted two competitors in that event. A place in the top five allows the successful skater to enter again along with two countrymen. Canada, then, is this year entitled to entre three skaters in the ladies singles event, one in the men singles, two pairs and one dance couple. Calgary, which is hosting the 1972 World Championship from March 6 to 12, is the third Canadian city to be so honoured. In 1932 the championships were held in Montreal and in 1960 in Vancouver.