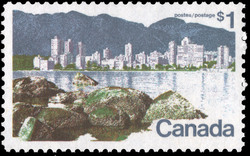 With 74 per cent of Canadians living in urban centres, the urban scene is a very important aspect of Canadian life. In little more than 100 years Canada has been transformed from a rural country to an essentially urban one. Urbanization means much more than mere movements of population. It means changes in the whole way of life in Canada, including institutions, the values and the behaviour patterns of its people. It means changing patterns of economic activity and developments in technology especially in communications and transportation. These two definitive postage stamps designed by Reinhard Derreth of Vancouver, serve to remind us of the importance of Canada's cities. The historic and the modern are represented by Quebec and Vancouver. Quebec, often called the cradle of New France, is an important eastern seaport. The origin of the name is not certain, but it is generally accepted that it derives from an Indian word, "kebec", meaning "where the river narrows". The city was founded in 1608 by Samuel de Champlain and incorporated as a city in 1832. It is the only fortified city in North America, and has 476,236 residents in its metropolitan area. Vancouver is the largest and most important Canadian seaport on the Pacific coast and the third largest city in Canada, with a metropolitan population of 1,071,081. The city was named Vancouver by Sir William Horne of the CPR after Captain George Vancouver who had explored the area in 1792. It was incorporated in 1886. The new $1 stamp replaces the one in use since 1967, and the $2 stamp has been produced in response to a need shown in postal operations.