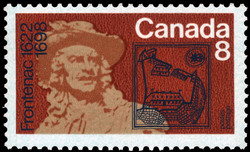 Frontenac came to New France for the first time in 1672. He had been appointed Governor of the French colony in America, a position that he held from September 1672 until September 1682, when he was recalled to France, and from October 1689 until November 1698. As Governor, Frontenac was the representative of Louis XIV. It has long been accepted that he was the greatest of the king's representatives in New France. The postage stamp issued to commemorate this anniversary show Philippe Hébert's statue of Frontenac which is in Quebec City. In the background appears a sketch of Fort Saint-Louis, Quebec, residence of the Governors of New France, as it was at the time of Frontenac's arrival. During Frontenac's second term of office, many important changes were made to the fort at his request. Louis de Buade, comte de Frontenac et de Palluau, was born on May 22, 1622, at Saint-Germain, France, the son of an old family of the "noblesse d'épée". He derived the title of Frontenac from the name of a family estate in Guyenne. In 1648, he married Anne de la Grange-Trianon. While she never came to New France, she served her husband's interests through her influence at the court of the King of France. A military man at heart, Frontenac was named "maréchal de camp", which today would be equivalent to the rank of brigadier. Like many noblemen of this era, he was very extravagant and greatly in debt. He was soon impoverished and this circumstances led him to accept the position of Governor of New France. As Governor, Frontenac had authority in military matters. However, during his first term, he neglected this principal responsibility in favour of territorial expansion to increase the lucrative fur trade. For this reason, in 1673 he founded Fort Frontenac, a trading post on the shores of Lake Ontario, where the city of Kingston now stands. In October 1689, when appointed Governor for the second time, Frontenac received more specific instructions concerning the defence of the colony. He discharged his duty on two important occasions. First, in 1690 he repelled an attack on Quebec City by a force from the British colonies led by Admiral William Phipps. Secondly, in 1696, Frontenac undertook a campaign against the Iroquois, whose attack seriously endangered the colony. This campaign resulted in the peace treaty of 1701. During the major part of the year, Frontenac stayed at Fort Saint-Louis in Quebec City, where he lived in a grand style and gave sumptuous receptions. He died in Quebec City on November 28, 1698. His widow survived him until 1707. Their only son, François-Louis, born in 1651, died in 1672 or 1673. A man of bold and dynamic personality, Frontenac was an influential figure in the early history of Canada. He is best remembered as the architect of French development on North America and the defender of New France against the attacks of the Iroquois nation and the British colonies to the south.