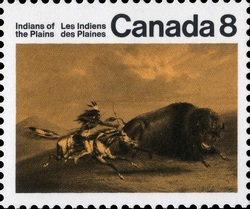 Most of the Canadian prairie is treeless and covered only with grass. Before the arrival of Europeans, great herds of buffalo shared the land with smaller herds of deer and antelope and with roving bands of Indians. On this western grassland there developed a human economy and society, that of the Plains Indians, remarkably adapted to the limited but rich resources of the region. The Indians of the Plains were nomads, travelling in bands throughout the year. They were a fun-loving people of who enjoyed funny stories, practical jokes and a wide variety of sports and games. The Plains Indians depended entirely on the natural resources of the area for their subsistence. In exploiting its greatest wealth, the herds of buffalo and antelope, they wandered over the country forming temporary camps of hide tents. During the summer, when the buffalo congregated in enormous herds on the most luxuriant pastures, the Indians formed large groups for organized attacks. But in the autumn and winter, when feed was scarce and less nourishing, the buffalo broke up into smaller herds. The Indian followed suit, forming smaller groups or bands and retiring to a traditional tract of territory where one or more favourite camping and hunting sites were located. Almost every part of the buffalo was used, supplying the Indians with more than meat. The hide provided heavy winter robes when dressed with the hair left on; thinned and with the hair removed, it was used for shirts, leggings, moccasins, tent covers and bags; tough, stiff rawhide was used for shields, large packing cases and moccasin soles. Cut into strips, it made strong rope. The air was used to stuff pillows and saddles from the hooves. The horn were softened by boiling and shaped into spoons and ladles, and the bones were fashioned into tools for the dressing of hides. There were frequently periods when no buffalo could be found or successfully attacked. To allow for the possibility of famine, the Plains Indians prepared pemmican. The meat was cut into thin strips and dried in the sun on wooden frames. When dry, it was slightly roasted, pounded to a mince, mixed with fat and then packed in large bags and sealed with a covering of tallow. The finest pemmican was made from the choicest cuts pounded and mixed with marrow fat and berries. The introduction of the horse greatly facilitated the buffalo hunt and provided a wealth of food and leisure and a form of personal property. A man's buffalo horse was a prized possession. The hunter usually left camp riding a common horse and leading his buffalo runner. The Canada Post Office will issue four stamps illustrating the Plains Indians. These, the first two, include a photograph of Plains Indians's artifacts and a print, "Buffalo Chase", by George Catlin, an artist who wandered widely in North America. The artifacts shown in the photograph are, from left to right, a club, a feather headdress, a woman's saddle, a beaded saddle bag, a moccasin, a decorated bison skull, a parflèche bag and a calumet or pipe. They were photographed by Ray Webber of Toronto through the co-operation of the Royal Ontario Museum and the National Museum of Man. Layout and typography were done by Georges Beaupré of Montreal.

George Catlin, "The Buffalo Chase : Singling Out", circa 1837 Museum of the City of New York, New York, United States