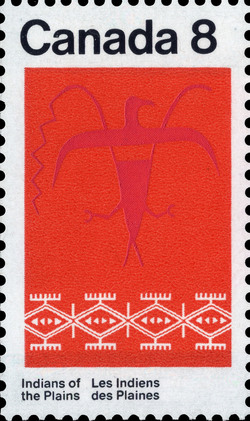 Before the arrival of Europeans there had developed on the Canadian prairies a human society, that of the Plains Indians, remarkably adapted to the region's limited but rich resources. These Indians were nomads, travelling in bands throughout the year. They shared the land with great buffalo herds, deer and antelope. As in all human groups with centuries of tradition, graphic representations perpetuated the Canadian Indians' religious beliefs. The symbol most commonly used to represent their most powerful divinity was thunder. The graphic symbol of this divinity in many Canadian Indian groups was a winged animal, powerful and frightening. The thunderbird reproduced in this pair of stamps is of Plains Cree origin. The decorative pattern is Assiniboine, Georges Beaupré of Montreal designed the stamp. Religion among the Plains Indians was a personal matter. Although there was no orderly hierarchy of deities, there was an intricate and precise pattern of behaviour in certain rituals, especially for the sun dance. During this ritual, which followed the short period of intensive summer hunting, individuals and the tribe as a whole sought power and well-being. The Plains Indians, constantly facing the prospect of death from starvation, sickness or at the hands of human enemies, lived in a world of uncertainty. But the supernatural powers which surrounded them could be called upon for protection and aid. These benevolent powers resided in the skies, in the waters and on the land. Sun and thunder were the most powerful sky spirits. Beaver and otter were potent spirits of the lakes and streams. In a quest for supernatural power, the young Indian man would go out alone on foot to some little-frequented place. There he fasted and called upon all the powers of sky, earth and water until he was exhausted and fell asleep. Then, an animal, bird or power of nature (such as thunder) might appear to him in a dream and give him some of its power. The spirit would show him certain objects sacred to it and describe how they should be made and cared for, and how they should be used to bring success and protection. The spirit would also give him the songs, face paint patterns, taboos and rituals associated with the use of its particular medicine. Soon after the young man returned home, he made the articles. These objects comprised the contents of his personal medicine bundle and were the symbols of the power given to him. The Plains Indians had a great fondness for personal adornment. The men wore their hair loose around their necks and decorated with strings of bird feathers. The handsome eagle-feather bonnets were reserved for battle, ceremonies and dress parades. Men's shirts were made of soft tanned elk or cow-hide elaborately decorated. Leggings of soft hide and skin moccasins completed the man's everyday costume. "The Fancy Dancer" reproduced in this pair of stamps is the work of Gerald Tailfeathers of Cardston, Alberta, an Indian of the Blood Band of the Blackfoot Nation. It illustrates the ceremonial costume a man might wear during the sun dance and is reproduced through the courtesy of the Glenbow-Alberta Institute. Layout and typography were done by Georges Beaupré.