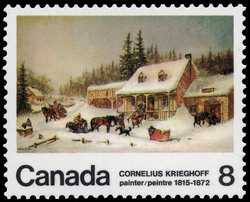 But for the visit of a beautiful young Canadian girl to New York in 1837, one of our leading pioneer artists, a man who produced more than 700 paintings, might never have made Canada his home. In that year, Cornelius Krieghoff landed in New York and met Louise Gautier dit Saint-Germain of Longueuil, near Montreal. We know little of the couple's movements until the early forties when we find them living in Longueuil with the Gautier family. Louise, their daughter Emily and the rest of the Gautier family appear in a large number of his paintings of this period. Krieghoff's studio and the Gautier home were favourite rendezvous for the villagers and Krieghoff seems to have been very popular for he was an amiable, humorous man and a loyal friend. Cornelius could barely make a living in Montreal. The bourgeois of that city preferred copies of European paintings to Canadian landscapes. For a period economic necessity caused Krieghoff to find employment as a sign painter. When John Budden entered Krieghoff's life in 1853, Louise seemed to pass out of it as his guiding influence. Two years previously, Budden, a partner in a firm of auctioneers, had taken some of Krieghoff's paintings to Quebec City where, he felt, Krieghoff would find a more appreciative clientele. The move to Quebec was the beginning of the most rewarding period of Krieghoff's life. The Quebec landscape differed considerably from that of Montreal and called for new resources, Krieghoff responded to the challenge and, from 1854 to 1869, his most productive years, he made steady progress. After 1860, however, he ceased to make any great progress and for three years was at a standstill. The next few years, 1864-1867, showed a decline in both quantity and quality, despite the fact that after 1864 he produced some of his finest paintings. What happened to him between 1866 and 1870 is unknown except that he went to Chicago to reside with his daughter and son-in-law. After 1867 a change had come upon him; he no longer felt the urge to work, nor did he possess the same creative energy. He returned to Canada for a visit in 1871. The reunion with his former friends was tinged with sadness. Budden urged hit to take up his brushes. Creative energy came back for a while and he painted four or five of his best paintings, among them "The Blacksmith's Shop" which is reproduced on Canada's new stamp. The hearty welcome accorded visitors streaming into the house gives us a glimpse of mid-winter habitant hospitality. But Cornelius was divided in his affections between his daughter and the adopted country where he had spent nineteen years. He returned to Chicago and shortly afterwards, while writing to John Budden of the happy days in the land he had made his own, he died of heart failure. Krieghoff's paintings are important both as works of art and as social documents portraying the life and spirit of Quebec. They bubble over with enthusiasm and reflect accurately the work, play, costumes and background of his surroundings.

Based on a painting by Cornelius Krieghoff Designed by William Rueter