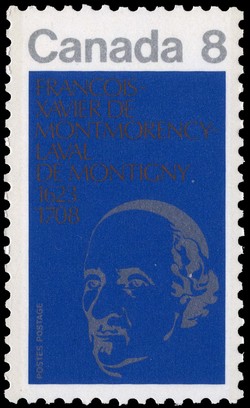 Mgr de Laval, first bishop of Quebec City and founder of many educational institutions, was also one of the builders of New France. The Canada Post Office is commemorating by the issue of a special stamp the 350th anniversary of the birth of this important figure in Canada's history. Born on April 30, 1623, in Montigny-sur-Avre in the Chartres district of France, François-Xavier, the son of Hughes Laval and Michelle de Péricard, was a descendent of the junior branch of one of France's noblest families, the Montmorency's, whose origin could be traced to pagan Gaul. He received his education from the Jesuits at La Flèche. It was at this time that he decided to devote himself to God as a priest. Ordained on May 1, 1647, he resolved to pursue his interest in the spiritual needs of the colonists of New France. He came to Quebec City in 1659 with the title of bishop of Pétrée to serve as apostolic vicar in New France before becoming first bishop of Quebec in 1647. He started to establish the Canadian Church by giving it the strength and unity of the parochial system. During the thirty years that he was bishop of Quebec, he founded an average of one parish a year. The bishop greatly encourages the educational institutions already in existence and those that he founded: in 1663, the Quebec City Major Seminary, the Quebec City Minor Seminary in 1668, and, at about the same time, the Saint-Joachim arts and crafts school, as well as a small school where white and Indian children learned the alphabet and arithmetic. Mgr de Laval took part not only in the organization of the Canadian Church but also in the reorganization of New France. When Louis XIV established the Sovereign Council in 1663, the bishop became the second most important man in the colony, immediately after the Governor. Mgr de Laval received from the king political authority which put him, in some ways, on the same level as the Governor: "jointly and in collaboration" with the Governor, he was responsible for appointing Council members and awarding seigneuries. The matter of the trade of alcohol with the Indians found Mgr de Laval opposed to other Council members. The bishop, who was against half-measures, used his influence and took a determined position against this trade which in his view meant degeneration of the Indians as well as of the traders. A man of great generosity, Mgr de Laval gave liberally of himself in order to accomplish his duties and fulfill his responsibilities. Many times he visited his vast diocese, by canoe in summer and on snowshoes in winter. When he gave up his office of bishop in 1688, he did not abandon his humanitarian and charitable activities. Mgr l'Ancien (Mgr Former), as he was called after his retirement, continued to visit the poor and the sick with unending devotedness. He died in Quebec City on May 6, 1708, after spending fifty years of his life in New France.