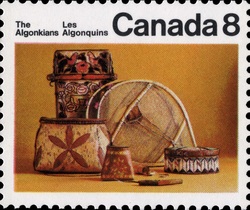 Algonkian is a family of related languages spoken over a wide area of Canada. When Europeans first arrived on the shores of this continent, Algonkian-speaking people occupied the whole Nova Scotia, New Brunswick and Prince Edward Island, most of Quebec, northern Ontario and parts of the Prairies. The Algonkian tribes populating these great eastern woodlands were the Ojibwa, Cree, Algonquin, Montagnais, Micmac and Malecite. The most important cultural item among the Algonkian Indians of the eastern woodlands is birchbark. It was used for the construction of canoes, wigwams and many types of containers. The Algonquins were a loosely organized tribe inhabiting the Ottawa Valley, both on the north side and on the south between the Ottawa and Lake Nipissing. Being hunters and collectors, they relied heavily on deer, berries, rabbits and fish. The territory of the Swampy or Woodland Cree extended from Lake Mistassini in Quebec to Lake Winnipeg and from the Ojibwa territory on the south to that of the Subarctic Indians on the north. Commonly considered a tribe, the Cree were in reality a series of bands, each fading into adjacent groups. The large area they inhabited had poor hunting resources and theirs was a marginal existence largely dependent on moose, deer, caribou and rabbits. The Ojibwa were the residents of the enormous wooded area west of the Ottawa Valley between the Cree on the north and the Iroquois of the Great Lakes region to the south. Each Ojibwa band tented to have its own dialect and way of life so that there were marked differences between the eastern and the western Ojibwa. As a whole, they were woodland hunters and fishermen who supplemented the results of their hunting skills with berries and wild rice. This necessitated seasonal migrations. In the winter they separated into small family groups and retired to a favourite hunting area. In the spring they collected maple sap and then gathered for the summer in larger villages where they planted corn. During the fall, the wild rice was gathered and white-fish were caught by those near Sault Ste. Marie. In the Maritime provinces were the Malecite and Micmac. They were primarily hunters and collectors of shellfish. Some corn was grown in southern New Brunswick. Northern Quebec was the domain of the Naskapi Indians. The south-west bands were called Montagnais by the French, and belong culturally and linguistically to the Algonkian group. Their population was small and their material culture, art and political structure extraordinarily simple because of the sparse resources of their environment. The anonymous painting "Micmac Indians" is reproduced courtesy of the National Gallery of Canada. The artifacts, photographed by Ray Webber, are from the collections of the National Museum of Man, the Royal Ontario Museum and Mrs. Alika Podolinsky-Webber. They are, from left to right; a Tête-de-Boule birchbark basket (the Tête-de-Boule are a division of the Ojibwa); an Ojibwa wooden papoose carrier; a pair of snowshoes for a Montagnais child; a Malecite birchbark basket; a Montagnais birchbark box; a Montagnais knife; and a Micmac birchbark basket decorated with porcupine quillwork. Typography and layout for the two stamps were the responsibility of Georges Beaupré.