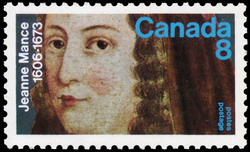 The first lay nurse to settle in New France, Jeanne Mance, was the founder of Montreal's Hôtel-Dieu Hospital and the co-founder of that city. Her numerous titles, the crowning of her achievements through a life of hard work, reveal a remarkable personality, one of the great figures of Canadian history. Born on November 12, 1606, at Langres, in Champagne, France, Jeanne Mance was the second of a family of twelve children. Having lost her mother at the age of twenty she assumed, along with her elder sister, her father's support and took charge of her younger brothers' and sister' education. As the children grew up Jeanne Mance had more time for charity work. It is very likely that during these years of benevolence she started her work as nurse. After reading the publication "The Jesuit Relations" she considered dedicating her life to the settlers in New France. She became a member of the Société Notre-Dame de Montréal and, having secured financial support from Madame de Bullion, she embarked for the North American continent on May 9, 1641. Paul de Chomedey, sieur de Maisonneuve, was also aboard. It was the start of a great adventure: the foundation and consolidation of Ville-Marie; the creation and administration of a hospital under extremely perilous condition; considerable undertakings; as well as hardships and a great deal of work on both sides of the Atlantic. Jeanne Mance's first and foremost aim was to serve the "poor Indian and French sick people in the settlement". The first lay nurse of this New World proved to be untiringly dedicated to the care of the sick and especially of wounded soldiers without thought of the side on which they served. Montreal's Hôtel-Dieu was founded in the fall of 1642, the year Jeanne Mance arrived at Ville-Marie. However, the hospital itself was not built until 1645. Constructed of wood, it was sixty feet long by twenty-four feet wide. In 1658 Jeanne Mance herself recruited nurses for her hospital, the Hospitalières de Saint-Joseph de La Flèche. In addition to running the hospital, Jeanne Mance was the treasurer and manager of the Montreal settlement, to the survival of which she made great contributions. On three occasions her strong decisions saved not only Ville-Marie and its hospital but possibly the entire country. She did not hesitate to face rough ocean crossings in order to preserve the work so painstakingly undertaken. She went back to France either to reassure and regroup the Associates, to obtain reinforcements and capital, or to look after the takeover of the Hospital from the Société Notre-Dame by the Compagnie de Saint-Sulpice. Jeanne Mance knew how to win the sympathy of the Ville-Marie inhabitants while taking an active part in the daily life at the settlement. On June 18, 1673, she died at the Hôtel-Dieu, the hospital she founded more than three decades earlier.