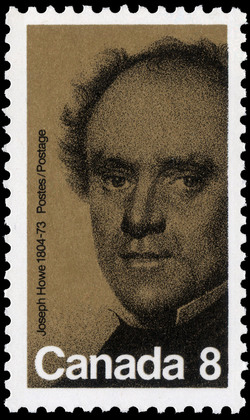 So wrote Joseph Howe, journalist, poet, orator and politician and one of the most influential Nova Scotians during the critical years prior to Confederation. Born in Halifax in 1804, Joseph Howe was a restless youth who turned to writing poetry in an attempt to dispel his restlessness. It was as a journalist, however, that Howe become involved in politics. Late in 1827 he purchased the Novascotian which he transformed into the finest newspaper in British North America. In 1829 he began his 'Legislative Reviews' which discussed the affairs of the province, the colonies and the Empire, thereby developing the interest of his readers in local and international politics and laying the foundation for his leadership in the reform movements of the period. In 1835 Howe published a letter alleging graft on the parts of the magistrates and police of Halifax. The result was a libel charge. Howe pleaded his own case brilliantly, was acquitted, and declared that the press of Nova Scotia was as of that date free. His entry into politics is normally dated from the successful outcome of the trial. Howe was the first elected to the provincial assembly in 1836. His platform was that Nova Scotians, like residents of Great Britain, should have a system of government responsible to the people. In October 1840 Howe entered the Executive Council in a coalition with James W. Johnston. He became speaker of the assembly and collector of excise at Halifax. Deciding to devote himself entirely to politics, he sold the Novascotian. The election of 1847 was fought on the issue of responsible government. The reform party won, leading to Nova Scotia's becoming the first province to achieve responsible government. Howe then turned his attention to the problem of railroads, resigning as Provincial Secretary to become chief commissioner of the Railway Board. Howe was defeated by Dr. Charles Tupper in the 1855 election, but he was re-elected in 1859 and became Provincial Secretary under Premier William Young. When Young resigned, Howe became premier. In 1862 he accepted an appointment as imperial fishery commissioner. The general election of 1863 saw the defeat of both Howe and his party. Howe played little part in discussions concerning Confederation until Tupper decided against consulting the people on the proposed union. Howe then entered the fray, spending two years attempting to have the Act of Union repealed. He felt that union shouldn't be considered until railroad links with the Canadas had been built and economic and social relationships established. By mid-1868, however, he realized that the battle had been lost. In April 1869 he was elected to the federal House of Commons and became Secretary of State for the provinces. He was re-elected by acclamation in 1872. The last public position Joseph Howe held was lieutenant-governor of Nova Scotia. He had been in that office for only three weeks when he died suddenly at Government House in Halifax on 1 June, 1873.