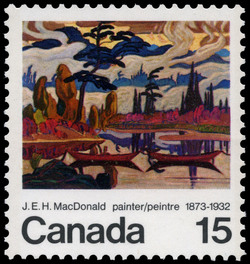 James Edward Hervey MacDonald, one of Canada's leading painters and a member of the Group of Seven, was born in Durham, England in 1873. His family came to Canada when James was thirteen years old and settled in Hamilton. Shortly after, they moved to Toronto where the young painter enrolled in the Central Ontario College of Art. After a period apprenticeship to a Toronto lithographing firm, he moved to Grip Limited where he developed into a distinguished designer. About 1911 MacDonald gave up his position at Grip to devote himself entirely to painting. Ten years later he was appointed Instructor in the Department of Design and Applied Art in the Ontario College of Art and in 1929 he became Principal, a position he filled with distinction until his death in 1932. James MacDonald was a quiet and thoughtful man with a strong sense of justice and humour. He was innately honest and had a kindly consideration for the weaknesses of others. Because of his strong sense of design and colour, it was to him that the other members of the Group of Seven gravitated to discuss their work. He himself preferred to work alone and solve his paintings problems by himself. MacDonald's early sketches were intimate little drawings of the things he saw daily near his home, but his vision was fresh and unconventional. He made his first of many trips to Georgian Bay in 1910. There followed more trips to Georgian Bay and to Mattawa, the Laurentians, Algonquin Park, the Maritimes, the Rocky Mountains and to the Algoma, a region which made a deep impression on him and where he did his finest work. MacDonald's most productive period spanned the years 1910 to his death in 1932. During these years his work showed a constant development, one phase merging with the next as he continually experimented and strove for an honest portrayal of the outward aspect and the inner feeling of the new regions he was exploring. About 1916, his work showed a marked change, improving in breadth of handling, freedom of expression and richness of colour. The year 1922 is notable for several excellent canvasses; one of them, "Mist Fantasy", is reproduced on this stamp courtesy of the Art Gallery of Ontario. The formalized design of this mysterious painting is made up of brightly-coloured shapes, either objects or mist, which give the impression of the slow movement of vapour even though the scene is absolutely quiet. MacDonald felt that the "Canadian spirit in art prefers the raw youthful homeliness of Canada.... It aims to fill its landscape with the clear Canadian sunshine and the open air, following faithfully all seasons and aspects." The combination of MacDonald's outstanding sense of design, his skill in the use of colour, his noble personality and fine intellect and his emotional involvement with the land he sought to portray produced magnificent canvasses. His work has individuality, distinction, sincerity, beauty and poetry and he is rightly considered one of Canada's most significant painters. He had an intuitive understanding and deep sympathy for the homely, simple things in Canada and this is reflected vividly in his paintings.