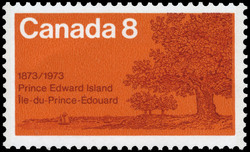 Prince Edward Island, a picturesque crescent-shaped piece of land, a few miles off the shores of Nova Scotia and New Brunswick, supports a population of some hundred thousand people. On June 29, 1534, Jacques Cartier began the exploration of the Island which was later given the name, Île Saint-Jean. Despite his describing the Island as "the fairest land that may possibly seen", there is no record of continuous occupation until the eighteenth century. First in the hands of the French, then of the British, the Island became a French possession once more before the Paris Treaty gave it to England in 1763. The Acadians were the first to settle in the Island in 1720. They were followed by the French and the British. After the signature of the Treaty came the English, the Scots, the Irish, and, a little while later, the Loyalists. The Island received its present name in 1799 to honour Prince Edward, Duke of Kent, father of Queen Victoria, who had once displayed an interest in Charlottetown's fortifications. Even though its capital, Charlottetown, hosted the first conference to form Canada in 1864, Prince Edward Island entered Confederation only on July 1, 1873, thereby becoming the seventh province to do so. Greatly concerned by the ticklish land question and by religious controversies, the Islanders gave their support to the federalists only six years after the Canadian Confederation. In the province of the ladyslipper, agriculture is a leading industry; the climate, and soil of a distinctive red colour are well-suited to the mixed farming; yields are high in both quantity and quality. Potato-growing and dairying are the most important agricultural activities. Prince Edward Island potatoes are known throughout the continent; both seed and table varieties are staple exports. The fishing industry, which produces the famous Prince Edward Island lobsters and superb oysters, brings substantial revenue to the province, but this is of much less importance for the province's economy than the revenue from the construction industry. Tourism also plays an increasingly important role in the province. Every year, thousands of visitors take advantage of the magnificent beaches and natural beauty of Prince Edward Island, appropriately named the Garden Province. The weather is perfect for vacationing and everyone can practice his favourite sport and enjoy the many artistic festivals and events. According to tradition, the large oak, part of the arms of Prince Edward Island, represents England and the saplings the three counties (Kings, Queen, Prince) of the Island. The motto, "Parva Sub Ingenti", means literally "Little under the Great". To the creator of the P.E.I. stamp, Anthony Mann of Halifax, the motto and general symbolism of the oaks seems appropriate for Confederation.